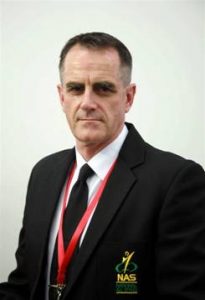 Inducted into the W.K.U.H.O.F. for 2012
Budoka of the Year – Chikara Kenpo Karate

Gary’s original training was in boxing, under the guidance of his father and grandfather, Dave Palmer, an ex Australian Heavyweight Champion and brother to Ambrose Palmer, multiple Australian Title holder. As a young man, he enlisted in the Australian Army and went on to become a Weapons and Drill Instructor at the School of Artillery. It was during his time in the military, due to injury, that Gary turned to martial arts and since 1976 has trained in Taekwondo, Freestyle Karate and Chinese Kenpo. Now, after 35 years experience, holds Dan rank in a number of disciplines.

Gary became involved with the National All Styles Tournaments as a competitor and official in 1996, competing successfully at State and National level. He qualified with the NAS Australian Referees Board as an accredited Referee and Judge in 1997 and went on to qualify as an official with the World All Styles Organisation. In 2007 Gary was appointed as NAS Technical Director for NSW, responsible for the training and development of new officials for the ARB.

2008 saw Gary appointed to the position of NSW State Director and a member of the NAS Board of Directors, with the mandate to promote and operate tournaments throughout the year, adding responsibility for the A.C.T. region to this portfolio in 2011.

Gary has continued to train and instruct in karate and kenpo throughout these years. Grading to Black Belt in Renshu Kai Freestyle Karate in the 1990’s under Sensei’s Rod Thompson and Shane Taylor, Gary became a senior instructor and area manager for western Sydney, responsible for running a number of dojos, conducting gradings and ran several successful school based anti-bullying and self defence programs in local primary schools. Founding his own organisation; Chikara Kenpo Karate in 2000, Gary now runs classes several times a week at his dojo in north-western Sydney and is justifiably very proud of his students, a number of whom are past and current State and National Champions in both kata and kumite.

Gary remains dedicated to the perpetuation of the arts and divides his time between working with the NSW Police Force, promoting and running tournaments with the National All Styles, training & instructing with Chikara Kenpo Karate, and plans to do so for some time to come.