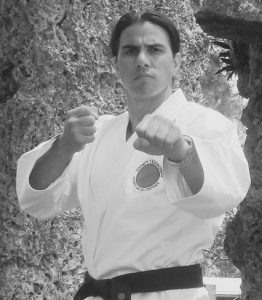 Inducted into the W.K.U.H.O.F. for 2011
Budoka of the Year – United Taekwondo

Rory Marama Hogan is the Chief Instructor – United Taekwondo for the Wollongong and NSW South Coast Regions and Founder of the Shugyo Gulid of Tacticians.

Rory began his martial journey over 25 years ago, studying Iaido under family friend, Sensei David Seal in 1986 and still trains with the same Bokken given to him by David to this day. Rory believes this gave him a great grounding in martial arts, imbuing patience and perfection.

He joined his first taekwondo class in 1989 under the instruction of Ben Basset. On the day he recalls the shouts of strength and power that emanated as he entered the Dojang. He was hooked on the Art, before he even walked in.

In 1995 Rory joined the Army in a program called the Ready Reserves, whereby he trained intensively over one year full time for deployment if required. During this year he received two distinctions, notably ‘Skill at Arms’ and ‘Outstanding Soldier’. Afterwards he was approached by two Officers who suggested he attend ‘Specialist Training’. He agreed, and over the next six months he conducted all manner of military tactics training. This included Sniper training in which he made history by not only becoming the first RRes soldier to make it onto the highly sought after course, but also pass it. It is known as one of the most challenging courses in the Army and out of the 20 that participated, only 2 passed.

In 1996 Rory began training intensely under the tutelage of Brett Canning as he prepared for his taekwondo black belt.  Then after leaving the military, Rory entered government intelligence and his new line of work eventually brought him to Sydney where he met Paul Mitchell and took over running Taekwondo classes at Brighton Le Sands Dojang in late 2005.

Rory began to apply his knowledge to the self defence tactics which he was taught as part of his duties. Commonly known as Operational Skills and Tactics (OST) in law enforcement fields some of the unarmed techniques were extremely effective and had been proven over time in many countries around the world. This training includes weapons such as baton and firearms, but his personal interest lay in the hand to hand combat and ground defense skills. Rory had become an OST Instructor by the end of 2007, qualified by the Queensland Police Force. Rory continues to provide this training and advice to government staff and management. He has brought some of these self defense tactics to taekwondo members at annual Special Training Seminars.

In 2006/7 he established the Wollongong Region for United Taekwondo and is now a Chief Instructor of the Art, with four Dojangs running classes five nights of the week. He has recently established a new Region for the Art on the NSW South Coast and has personally trained many students to black belt level. Rory also assisted in opening the first International Branch of United Taekwondo in Tonga.

In 2008, with Paul Mitchell and Josh Taumoefolau (Bunting), he created United Taekwondo’s first systemized DVD pack (incorporating 5 DVD’s) professionally produced as a study tool. This was the first comprehensive tool created for taekwondo in Australia and has been a great success. It has helped to standardize techniques and patterns across the various regions and provides some inspiring footage to motivate students. As part of promoting the Art they also produced a video clip for You-tube called ‘The Dream’ to inspire new people to join the Art.

For the last two years Rory has been a qualified Level 1 Coach by the Australian Sports Commission and takes Active After School Community (AASC) classes where he has brought taekwondo to hundreds of school children, both in the PE curriculum and outside school hours. The great reputation he, his wife and team of Instructors (who are also now involved) have amongst the schools in the Wollongong area is something he is extremely proud of.

In 2010 Rory entered competition and was involved in the forth round of National All Styles Tournaments in Canberra where he placed 1st in Point Sparring.

Over the years Rory has refined his weapons skills, most notably with the re-curve long bow, which he also hunts with, and the taiaha, a New Zealand Maori fighting staff employed similarly to the Asiatic Bo staff. He regularly travels and trains with leading Instructors including Boxing at Kostya Tszyu’s gym in Rockdale, Sydney, and BJJ with Instructor Ben Turnbull in Canberra.

Rory has founded ‘Shugyo – Guild of Tacticians’, a specialized way of training and Organization dedicated martial growth. Rory personally administers Shugyo Guilds and is actively promoting this new paradigm for members of all Arts to come together in the Spirit of learning and betterment. Information regarding Shugyo is available at www.shugyo.com.au

Rory is active in his local community, fostering sporting and self defense related activities. He also assists schools to build students respect, discipline and anti-bullying strategies.

As part of his holistic approach to Martial Arts, Rory is compiling a journal of poetry and philosophy he has written, much of which contemplates the challenging path of the warrior and teacher. The following is an excerpt from his notes:

As I look at myself in a mirror

And see a man that was once a boy

I wonder when time will consume me

As the raging fires razed Troy

And balancing both I approach my destiny

With fellowships forged the martial way

Softened by love of kinship from my family

But how significant could my life be?

I am neither the first nor the last

Merely a grain of sand

In some eternally flowing hour glass

Deep and long are my thoughts

On life and death and beyond

And short is my life I must understand

Like ripples that break the still of a pond

Sometimes I forget to look around

Seemingly working for what may be

Not realizing that all I’ve ever wanted

Is actually right before me

So every day I savor one moment

As if the day would be my last

Knowing that the simple things are enough

Taking my time, reflecting on the past

For the life I lead is blessed

Wherever I tread in places near and far

A shining moon enhanced by the stars

As I journey alone I sometimes find

When will it come and how will it end?

Caught with uncertainty in my own mind

But then my peers come about me

Fellow warriors and masters it matters not

Our paths are intertwined

We stay together where others will not

With respect for our Brothers here and past

Side by side we warriors walk alone

And with honour we live both lives

So we must lead now for others to follow

May we sweat more while there is peace

Then bleed less when war comes to stop

It is said that blood is thicker than water

And faith will bridge the rift

But sometimes when my kinship falters

Your fellowship gives me the gift…