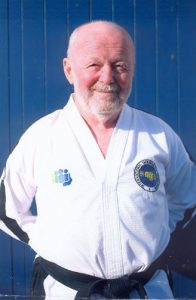 Inducted into the W.K.U.H.O.F. for 2011
Instructor of the Year – Taekwondo NZ

Sensei Peter Graham began his existence in the middle of the 2nd world war. He was born in Auckland as the son of an officer in the Royal New Zealand Navy in 1942.

After leaving school at the age of 15 he began an apprenticeship as a jockey. He followed this career for six years before weight got the better of him and he was forced to make another career choice. This culminated in him being certified as a rigger/dogman which eventually took him across the Tasman where he worked in places from the Sydney Opera House and then further North to Queensland and places like Gladstone (the Aluminium Plant) and Townsville (The Army Camp).

During this time Peter had qualified as a navy trained diver and after leaving Townsville he was employed as a diver for a sand mining company on Stradbroke Island.

There he met his wife to be (June) and after they were married in Melbourne in 1967, he took on a job as an abalone diver at a place called Cann River. Abalone diving was in its infancy in those days and although the money was very good, it was nowhere near as good as it is today! (Unfortunately)

Peter & June returned to New Zealand in 1969 where Peter began working for his father in a screen printing business.

Since then they have produced two daughters, who have gone on to present them with six grandchildren.

It was one of those who dragged him along to a Taekwon-do class in Wellington under the instruction of Master Evan Davidson. (Recently inducted into the AMAHOF, and at that time a 1st Dan)

That was 1978, and since then Peter has served the International Taekwon-do Foundation as President for 13 years, has been an Instructor of one of the largest clubs in NZ for the past 25 years, and currently serves on the Board of ITFNZ.

He is a qualified senior examiner, an ‘A’ grade judge, referee, and umpire and was promoted to 5th degree (dan) in 2008.

As with most martial artists of his vintage, he has had three shoulder surgeries, two ankle ops and a recent total knee replacement.

But also like most of the martial artist of his vintage, he will never give up!