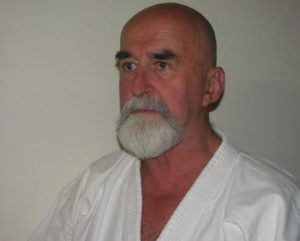 Inducted into the W.K.U.H.O.F. for 2011
Instructor of the Year – Goju Ryu Karate

Renshi Shihan Klaus Mueller was born in Germany in 1950 and his family immigrated to Western Australia in 1953.

Previously Klaus had some experience in Judo, Ju-Jitsu and Shotokan with the Police and Citizen Organisation, but instructors and places have been long forgotten. After receiving his Shodan in 1975 he travelled to Europe where while travelling he trained with various Martial Arts and karate styles. On his return to Western Australia he settled in Manjimup and started the Manjimup Karate Club. In 1983 he was fortunate enough to train and be graded in Japan to 3rd Dan by the late Gogen Yamaguchi (10th Dan), the then head of Goju Kai Karate. While in Japan he was honoured to be taught Kubudo by the late famous Master Motokatsu Inoue. Later he spent some years training in the art of Chi Kung and Wei Mu with Sifu Anthony We. With the passing of Gogen Yamaguchi he was graded by his son Goshi to 4th Dan. Recently he was graded to Godan and awarded the title of Renshi Shihan by Gonnohyoe Yamamoto of the International Karate Do Organisation, All Japan Karate-Do Association. Klaus is an Australian Institute of Sport accredited coach and is a life member and assistant Chief Instructor of the South West Goju Ryu Karate- Do Association.

The Manjimup Rin Bu Kan Karate Club was started in the South West of Western Australia in 1978. Thirty three years later the club is still training at the same hall; mentors two other adjoining town clubs and in 2010 had over 100 students training in either Karate, Iaido or Jodo.

Klaus’s aims in martial arts remain the same. His Budo philosophy is; “Shoshin” (初心), a concept in Zen Buddhism meaning Beginner’s Mind. It refers to having an attitude of openness, eagerness, and lack of preconceptions when studying and training in a martial art, even when studying at an advanced level.

Klaus has enjoyed many training hours over many years with some fine martial artists who were humble, open and keen to share knowledge and has used that knowledge to enhance the development and personal growth of his many students over many years. He states: “I strive to perfect my basics, pass on to my students as much of my accumulated knowledge as I can and keep training as long as I can. The day I don’t enjoy going to training I will stop”.