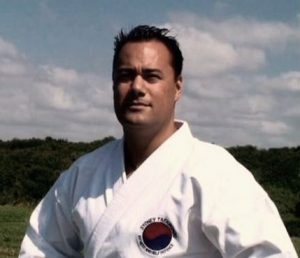 Inducted into the W.K.U.H.O.F. for 2011
Budoka of the Year – United Taekwondo

At five years old I was introduced into the world of fighting. Unfortunately this was not in a dojang or structured class environment; it was in and out of school in scraps, clashes and ugly fights. Unbeknownst to me at the time, I was a victim of racism, but all that mattered at the time was who won the fight. It was during this early time in my life that I made an ally in Chief Instructor Rory Hogan, who was also a target of racial prejudice and who was to become my lifelong friend. This constant exposure to violence cultivated an unwavering aggression in me – something my father identified early, and an essential trait that over the years I have managed to control and master to my fighting advantage.

Two years later in the winter of 1982, my parents enrolled me with Judo at the local YMCA in Woden, Canberra under the instruction of Instructor Peter Chung. Within two years, I had attained a middle rank and had fallen in love with the ways of the orient. It is this passion that has paved the way to a continuing life of martial study. In 1984, I commenced training in Taekwondo in Woden, Canberra under the direct instruction of Master Chong Chul Rhee. I was initially inspired to move to Taekwondo by the impressive kicking techniques the art is well known for. I quickly achieved the transition between Judo and Taekwondo and continued to train in the “Ch‟ang Hon” style [traditional taekwondo developed by General Choi Hong Hi in 1955], which became thereafter my core art.

Between 1984 and 1994, while studying Taekwondo I mastered a number of martial weapons including the bo-staff, nunchaku, bokken, knife fighting and later the sai. I became an advent with the composite bow when introduced to archery in the late 80‟s, and these days enjoy practice with a 70pound compound bow.

In 1994, I joined with National Taekwondo (Australia) in Canberra under the instruction of Master Instructor Allen Byrne and later was promoted to 1st Dan black belt. I became the assistant instructor for the Tuggeranong area (under Instructor Mark Hourigan).

In the late 90‟s I was promoted to 2nd Dan Black Belt with National Taekwondo. At this time, I began to broaden my martial art training into other arts. I commenced training with Kokusai Jujitsu at the Australian National University under the direct instruction of Hanshi John Bear. I quickly adopted the jujutsu style and found it to compliment my Taekwondo art, providing a well rounded fighting combination.

Shortly after, in 1999, I moved to Tonga due to a combination of new employment and „returning to the roots of my culture‟. Following the relocation, I immediately began to instruct and was the first to introduce the “Ch‟ang Hon” Taekwondo style to Tonga. The experience was memorable; I recall a number of instructors from other arts turning up at the dojang for challenges. There is nothing better than „old school‟ sentiments. Suffice to say I became good friends with them all afterwards.

Between 1999 and 2001, I continued to privately instruct a small number of students in Tonga as well as conduct self defence seminars for schools and women‟s groups within the community. These commitments provided me with the opportunity to promote the value and importance of martial arts in more vulnerable groups.

In 2001, my first stint in Tonga ended and I returned to Brisbane, Australia to undertake a Bachelor or Justice at the Queensland University of Technology. At this time, I commenced training with Ninjitsu Australia under the direct instruction of Sensei Wayne Roy. Having studied under a number of Japanese martial arts, Ninjitsu was a diverse inclusion to my martial skills. I continued with my budo training with Ninjitsu until my heart yearned to return to Tonga again.

In early 2003, I moved back to Tonga and was immediately driven to initiate lifelong dream of establishing my own school within the islands. Within a few months, I founded T.N.M.A (Tonga National Martial Arts Academy), an art that incorporated Taekwondo and Jujitsu; fashioned to combat the threats in today’s society. It was an immediate success. I achieved a 2nd Dan black belt within the art and was awarded Certificate of Recognition from the T.A.S.A (Tongan Amateur Sports Association) by providing alternative „sports‟ for the community with a focus on youth.

In 2005, due to sudden personal reasons, I returned to Sydney, Australia. At this time I commenced a career in Law Enforcement; a goal I‟d posted since studying Justice in Brisbane. While continuing contact with my T.N.M.A students in Tonga, I resumed training with Rhee Tae Kwon Do after twenty years. I was awarded a 1st Dan Black belt following a trial grading and continued under the direct instruction of Grandmaster Chong Yoon Rhee.

In my personal life I had undertaken the „First Appointment Course‟ with the Australian Army Reserves at the University of New South Wales Regiment. For three years I trained extensively with weapon handling, field craft, operational strategies and tactics under the RMC (Royal Military College). Shortly after, I was accepted into the Australian Federal Police, and following extensive recruit training in Canberra, I was posted as a Federal Agent, Crime Operations in Sydney.

In late 2008, I started a music business named „Musashi Music Productions‟ with the primary focus of composing „soundtrack scores‟ to assist Chief Instructor Rory Hogan in creating the first systemized 5 DVD pack incorporated for members to have as a study tool at home. It was the first comprehensive tool created for Taekwondo in Australia, and as a part of promoting the art, we also produced a video clip for You-tube called „The Dream‟ to inspire potential students.

In 2009, I was promoted to 3rd Dan black belt with United Taekwondo. I also commenced private training in the Liuhebafa kungfu system. It was an incredible experience learning an „internal martial art‟ after training hard styles all my life. Again with all the other arts I‟ve studied, I was able to (and continue to study it) incorporate the fundamentals of Liuhebafa into Taekwondo.

During 2009, following discussions with Master Instructor Paul Mitchell, I commenced assimilation with my T.N.M.A students in Tonga with United Taekwondo. Again the opportunity to continue my dream of running a dojang in Tonga came to a reality. In late 2009, with the assistance of Chief Instructor Rory Hogan, I opened United Taekwondo‟s first international branch in Nuku’alofa, Tonga.

Throughout my training over the years, I have applied the ancient training method of „shugyo‟. It has always provided me the „harnessing of warrior heart‟ and the „sharpening of spirit‟ in the martial way. In turn, I had over the years shared this training with my students in Tonga which resulted in positive feedback. Now for the first time in late 2010, with Chief Instructor Rory Hogan, we have created a four day intensive “Shugyo Immersion‟. We hope that this unique type of training for black belts can provide a new way of training; a taste of the old ways and the continuation of their Budo.

I continue to manage United Taekwondo Tonga dojang from Australia and travel there twice a year in order to conduct gradings, provide special trainings and develop initiatives to reach out to the wider community. To date, United Taekwondo have supported local programs in the Tongan community such as “Women’s Leadership” self defence, domestic violence awareness, youth initiatives and scholarships for students to study United Taekwondo.

I currently am writing a book called “The Martial Code”, a compilation of martial skills and experience I have learned, supported by ancient and contemporary philosophy which I hope to have published by the end of 2011. My hope is to share this will all members of the martial arts community as to promote understanding and development, and provide inspiration to all young men and women passionate about learning ways of the martial arts.