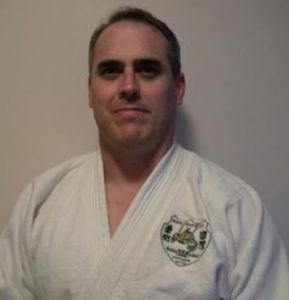 Inducted into the A.M.A.H.O.F.(Inc) for 2011
Martial Artist of the Year – Kokusai Jujutsu Ryu

Inducted into the W.K.U.H.O.F. for 2011
Martial Artist of the Year – Kokusai Jujutsu Ryu

Doug commenced training in Jujutsu in 1991 at the age of 16 as a participant in jujutsu beginners courses offered at the Australian National University by the “Kokusai Jujutsu Ryu – International Jujutsu Institute Australasia”. He had tried several other martial arts including freestyle karate and kickboxing but in Jujutsu he found an art which challenged him mentally and physically and provided a depth of learning which he knew would continue indefinitely.

Training for up to 8 sessions a week, including daytime sessions and weapons classes, Doug quickly progressed through the ranks achieving his Shodan (1st degree black belt) in 1994, with Nidan (2nd) and Sandan (3rd) following not long after in 1996 and 1997. During this time, he trained closely under AMAHOF member John Bear shihan having been accepted as one of his personal students. Doug was exposed to a wide variety of aspects of the art of Jujutsu and its sub divisions through regular seminars and workshops. These included aikijujutsu, iaido, kenjutsu, jojutsu, kuatsu, atemijutsu, shimete (shimewaza), grappling, kobudo weapons, and Shotokan karatedo.

Along with studying the KJR jujutsu arts, Doug has also delivered and assisted Bear shihan with the delivery of courses as diverse as beginners courses, children’s classes, women’s self defence and school programs. As a senior instructor, Douglas has been a grading panel member for many Yudansha (Black Belt level or ‘dan’) gradings in Jujutsu and Kobudo.

Doug has also been involved in various competitions as part of his study of Jujutsu. This included being the ACT overall Jujutsu champion from 1994-1996 in a competition format which tested elements such as sparring, team kata, self defence and weapons kata.

In 2004, as a new Dan rank, he was selected by Australian Capital Territory Team Captain/Coach J. Bear, to represent his club and art as part of a four man kata team at the Australian National Selection Titles. In October 1994, the team became the 1995 Australian Jujutsu Kata Team Champions and was selected to represent Australia in the Team Kata Division at the 1995 World Council of Jiu-Jitsu Organisations (WCJJO) 6th World Jujutsu Championships. This event was held in Auckland, New Zealand in October 1995 and the team was expanded to five members including Douglas. The Australian Kata Team won the Silver Medal at the 2005 World jujutsu championships, behind New Zealand and ahead of Canada and the United States.

In 1999, Doug left Canberra and moved to Sydney to pursue a career in Law Enforcement. He continued to train in KJR Jujutsu returning to Canberra regularly to train with Bear Shihan and senior ‘dan’ ranks. While living in Sydney, Doug assisted a local KJR Dan ranks with beginners classes at Macquarie University, and regularly travelling to Newcastle University to deliver coaching and advance training to their members.

In August 2001, Doug travelled with Bear Shihan to Oslo, Norway. Doug assisted Bear during the 21st International Jujutsu and Kobudo Seminar Week. (The KJR organised regular visits to the Norway Club was founded in 1990, at Oslo University, by one of Bear Shihan’s senior jujutsu dan students). As well as assisting with coaching and administrative activities, Doug was also graded to the rank of Yondan (4th Dan) during this seminar. Doug returned to Norway on two other occasions, representing the KJR in his role as a senior coach.

Douglas Venables subsequently returned to Canberra and continued study and participation in KJR Jujutsu activities grading to Godan (5th Dan) in 2004. He was also awarded the special KJR licence of Menkyo (grading authority), only the second person to receive this formal transmission from Bear Shihan, in the arts history in Australia which dates back to 1970. He also graded to Nidan (2nd) in KJR Weapons Division: Meidokan Kobudo in 2004, having commenced Kobudo in February 1994. This division operates on a different ranking and grading syllabus from the KJR Jujutsu.

In recent years, Douglas has continued as an instructor of Yudansha within the Kokusai Jujutsu Ryu – International Jujutsu Institute. In 2006 he achieved Rokudan (6th dan) red and white belt. Doug has since progressed to Jujutsu Nanadan (7th Dan) and gained the special rank of Okuden (penultimate level in the study of the inner arts of Kokusai Jujutsu Ryu). This recognition coincided with the 35th Anniversary of the Kokusai Jujutsu Ryu – International Jujutsu Institute, when a special Yudansha grading review was undertaken within the Institute.

Douglas Venables continues to instruct within Australian Law Enforcement, and remains a valued practitioner, instructor and ambassador of Kokusai Jujutsu Ryu, both in Australia and Overseas. He has been a continuing KJR member for twenty years.