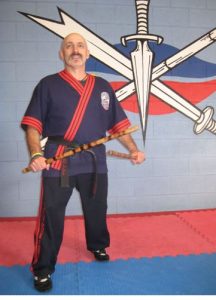 Inducted into the A.M.A.H.O.F.(Inc) for 2011
Martial Artist of the Year – Cacoy Doce Pares

Inducted into the W.K.U.H.O.F. for 2011
Martial Artist of the Year – Cacoy Doce Pares

Master Craig Bajraktarevic-Hayward was borne with a form of Spina Bifida and it could be said that he commenced his Martial Arts career then and there. Unable to walk until after major surgery at the age of three, his spirit, courage and determination was forged at this tender age.   It is the mind of a warrior that sets us apart and makes us strive for excellence, and Master Craig’s mind and spirit fuelled his determination to be part of the action and not sit on the sidelines of life.

At the age of twelve Craig began his training when he took up Boxing under the tutelage of British Golden Gloves Champion Ron Symonds. This continued for a period of two years before his interests moved to music and more gentle aspects of the Martial Arts.

Looking to satisfy a spiritual rather than physical need, Master Craig commenced Tai Chi practice with Sifu Jim Gibbons who was also a practitioner of Eskrima. Sifu Jim encouraged Craig to take up the art of Eskrima and he was immediately taken with the fluid yet brutal nature of the art.

After recognizing his potential, Grandmaster Martin Gardiner graded Craig to 1st Class Brown Belt. Soon after, in the absence of the usual recognized teachers, Grandmaster Gardiner gave him the responsibility for teaching new students.

Now a firm and loyal student of Supreme Grandmaster Ciriaco Cacoy Canete, Craig saw the importance in keeping an open mind to his training and committed himself to further his studies in Aikido, Grappling and Kickboxing. It was a constant search for the common elements within each of these disciplines that enabled him to gain a great understanding of both the spiritual and physical aspects of the arts.

When asked to describe his teaching style, Master Craig often says that he “teaches by confusion”; a teaching style seemingly often used in the Philippines . Master Craig allows his classes to develop and move along at an irregular pace so that students do not get locked into a single way or approach.

After moving to Sydney in 2001, Master Craig forged good links with other respected teachers in the Western Sydney area and was able to open his own facility after four years of teaching at five different locations around the city.

Master Craig’s greatest wish is to produce students with integrity, commitment and a desire to improve.

To sum up Master Craig’s approach to life and the Martial Arts, the following quote from Albert Einstein is most appropriate:

Other Achievements and Training