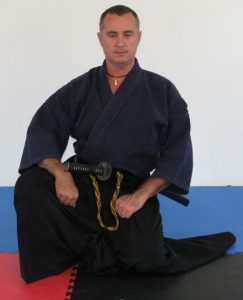 Inducted into the A.M.A.H.O.F.(Inc) for 2011
Instructor of the Year – Scorpion Karate

Inducted into the W.K.U.H.O.F. for 2011
Instructor of the Year – Scorpion Karate

My name is Anthony Joseph Luke Kavanagh and I am currently a 4th Degree Renshi with Scorpion Dojos and Zen Do Kai, I have been training in the fighting arts for now 25years.

Our club motto “whatever it takes” was taken after a turbulent couple of years in the beginning of our unknown journey back to ZDK. We at Scorpion Dojos strive for more than just teaching a style or a system but to compete with Soke Bob’s meaning of Zen DO Kai. “The best of everything in progression”, to us it’s not just following blindly but “lead by example, follow by choice” as Soke Bob has done before us all.

We are grateful to Kyoshi Sama Anderson for allowing us to come back into the fold so to speak, after the initial club of Scorpion Dojos left in the early eighties, they continued to teach all the protocols of ZDK but under different guise SIMAC [Scorpion Integrated Martial Arts Centres].

I have fond memories of my first visit as a child of six to the local fire brigade at Woodridge fire station for boxing. Growing up in the Woodridge/Kingston area I lived next to and trained alongside some of the Queensland’s best boxers. They went on to be Golden gloves Lonny and Elwin G’Williams and Australian Title winners Dale and Ernie Attango, unbeknown to my parents I fought them weekly, as a child I was very accident prone always hurting my nose and falling over.

At school discovered Moon Lee Tae Kwon Do and trained with Sensei Scott Nicolas achieving Red Belt in 1982. Whilst having my first part time job at the local Kmart I was introduced to Bunjinkan Ninpo and the freedom it offered was challenging, I knew from then on I wanted to be a free-stylist so began my journey, with the inspiring tutelage of Nicolas Larfranigh this spanned 82 to 85 I achieved my 1st Dan ranking. As a serving member in the Australian Army Reserve 1984 to 1986 and then regular Army thru to 1994 I came into contact with many great CQC instructors in knife, pistol, stick and club. In 1991 at Enoggera I was introduced to Scorpion Integrated Martial Arts a truly freestyle club run by Renshi Glen Rushton (ex ZDK) and was hooked.

After leaving the Regular Army in 1991 I went back to {SIMAC] Scorpion Integrated Martial Arts Centres to compete ant train for many years. The class in my area was run by Sensei Peter Barnbrooke 2nd Dan and over the next 17yrs I have taught, trained and now taken over the reformed Scorpion Dojos. This happened as Sensei Peter retired in 1995 and Sensei Gavin Milley 4th Dan took the helm. He went on to leave us in 1997 to assume a life of service in the fire brigade and Dai Sempei David Reid came onto the scene. Work commitments took the now Renshi David Reid to start our Gold Coast club and I took the instructorship on the 9th February 1999.

I was introduced to Sensei Geordie in 1999 and began doing Eishin Ryu sword and Kenjitsu under both him and Sensei Glen Stockwell for the next 5 years thru to black belt. Seeing that we at Scorpion Dojos had something to offer and in the brotherhood of training Kyoshi-Sama Anderson and his fellow instructors with special thanks to Renshi Lavers McBain 4th Dan and Renshi Karen Fischle 4th Dan allowed us to return to Queensland Zen Do Kai they completed our kata training in the ranks we had attained which allowed us to carry over our ranks to present day. Due to unforeseen circumstances a new path was being opened for Queensland Zen Do Kai and a new style was formed in the construction of ABK {Anderson Bushi Kai}.

Making a commitment to ZDK BJC [Bob Jones Corporation] we decided to honour this and stay with ZDK BJC. After speaking to Soke Bob meeting and training with him in the past few years in Toowoomba I feel humbled and honoured that he has allowed us to continue to train under the banner of ZDK BJC we will continue to spread the word and act according to the code set forth in Budo. Incidentally after we aligned with Renshi Geordie 4th Dan of Black Dragons ZDK BJC in 2002 another twist of martial fate was unfolding behind the scenes and Renshi Geordie would go out on his own to form Black Dragon Martial Arts in 2004. Scorpion Dojos has been a part of ZDK BJC lore now for some 25 years firstly under Dai Sensei Warren Wright 3rd Dan now myself for the past 8 years.

Grading are events I have grown to love to hate and have always written down about the event. This I also recommend for my student’s to do so as they to can look back at there progress both physically and mentally on this long and sometimes bumpy journey. I distinctly remember doing my Dan with a sprained ankle and against my doctor’s advice, it was my third attempt and nothing was going to stop me…The first attempt was stopped by work commitments one week from grading and my second event was stopped by a bout of meningitis again out of my control.

Third Dan kata grading was something I myself didn’t really take to serious until questioned by junior ranks as to “what self-defence move was that Sensei and when do I get to learn it” I thought and answered flippantly “oh it comes form the Si So Chin kata” almost as if being hit by Renshi Vicky {whose constant battle with me and kata perplexes her even to this day} did I know then there are no secrets just time spent in kata to achieve your own internal perfection. My personal style of no-nonsense self-defence comes from and is only an extension of kata wether it be it done forward, backward or as Soke Bob had us do one year lying down. {Senjo 2003 Sanchin Kata on our backs} I yearn to see kata from as many styles as I can to add just one more move to help bring about the best of everything in constant progression.

Forth Dan…four different weapons… kata with each…four opponents 2nd Dan or equivant…forty by one and a half min rounds with and against each weapon…nothing else need be said? …well maybe ouch…

To my first TRUE freestyle instructor with whom I hold fond memories of being knocked out on my first night training against him Sensei Peter Barnbrooke thank-you my eyes were opened and closed that night. Let us not forget my best friend, best man and all round good guy Renshi David Reid 4th Dan, his boyish charm and looks disguise skill personified not only in Martial Arts but in life’s little challenges, he is a teacher, friend and mentor to all our students past and present.

I have completed Seminars with overseas greats to:

Most of all to Vicky Kavanagh whose 30 years of traditional martial arts knowledge (Shukokai and Yamaguchi Goju-Kai) dwarfs my own with her technical ability making Vicky in my humble opinion one of the great Kata exponents of our time, she is an innovator within Zen Do Kai. Without her constant support in the severest of both personal and martial times you would have seen me leave the martial arts arena. You now and always will have my utmost devotion and love.

My Life in Martial Science

Hosted events to be one of the best learn I need to learn from betters.

Looking back at my time spent in the pursuit of martial knowledge I have come to the conclusion that the growth of people is the only personal achievement I care for now. If a person comes to an instructor with any sort of self doubt, health or fitness problem we as instructors are obliged to pass on the relevant information. We are all in fact custodians of knowledge not the originators or owners of it. So I think my personal best achievement would have to be the FREE self-defence and awareness seminars that I give to nurses, aged persons homes and community groups. Not for the feeling of pride we get in the giving for free but that internal pride one receives when you are contacted by members of that group sometime later maybe many months after my course and informed that that the technique worked it “did its job” and that the person was safe because of it. Personal interaction and Safety is what I do, it’s what I should take pride in and so my greatest achievement is to continue to add to personal safety for as long as I can…for free.