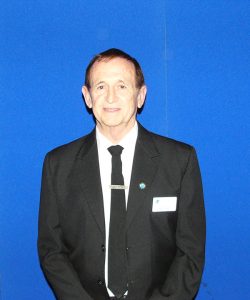 I was born on the 20th November 1946 in Auckland.  I grew up in Waipipi, a small farming community north of Waiuku New Zealand where I started boxing at 12 years of age.

In 1962 at the age of 15½ I was accepted into the Royal New Zealand Navy and served my country for 10 years. In 1964 through 1965 I saw active service in the Malayan Conflict as a Gunnery Rate.  While I was in the Navy I continued boxing and in 1967 I changed from boxing to karate and did 8 years on and off.  When I returned from active service I joined the Returned Services Association and was president in 1985 and in again 1989.

I took time out from my training in 1973 to get married and start a family.  In 1981 I went back into training in traditional Shotokan Karate and have now done 29 years.  In both 1986 and 1992 I travelled to Utsunomiya, Japan to further my training and understanding of karate.

Upon returning from Japan the second time in 1992 and being fed up with all the politics going on between the different karate associations, and having had to grade to Shodan twice because one association wouldn’t recognise the other.  I went out on my own and formed Counties Shotokan Karate New Zealand, in Pukekohe with 5 members there are now 140 members training in the Honbu Dojo.  In 1996 I opened my second dojo 20 kilometres west from Pukekohe in Waiuku and in 2004 I opened a dojo in Hokitika on the West Coast of the South Island.  Between the 3 clubs the membership has risen to over 300 students.  In 2009 Whakatane and Rotorua Dojo’s joined my association.

In 1996 seeking to further my own knowledge and training, I sort out and joined Sensei Ray Dalke’s association which also led me to many trainings and experiences with Hidetaka Nishiyama Sensei of whom Ray Dalke trained 48 years under until his death in 2008.  Sensei Dalke now heads one of the biggest organisations in the U.S.A, ‘The Traditional Karate Organisation’ (T.K.O).  I have since then travelled to Oregon, U.S.A annually to train with Sensei Dalke and in November 2009 I was awarded my 7th Dan by the T.K.O board of examiners.

I have had much success in taking teams to tournaments overseas, the first to Australia in 1998 and then again in 1999 and 2000.  In 2007 I took the New Zealand JKS team to Okinawa, Japan for the JKS World Championship with very rewarding results.  In 2008 I led a team into Munchen Gladbach, Germany.  This was also another very successful trip, where New Zealand came in 3rd over all.  From these trips I have met many likeminded individuals of whom I still keep in contact with.   I have had many students come and train in my dojo with me from overseas some of which are: Switzerland, Germany, Poland, U.K, South Africa, the U.S.A and Japan.  Since the year 2000 I have run 2 tournaments a year here in Pukekohe, with many having up to 250 competitors, making them one of the biggest martial arts events in the country.

I have many students training with me who started as young as 6 years of age and are now in their early 20’s and are still here training.  I have had many comments from parents over the years about how karate has helped their children with respect, confidence and maturity and how it has helped them in everyday life.