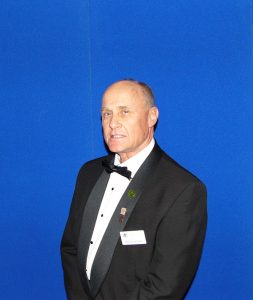 Martin Gardiner has been an inspiration to many men and women throughout his 41 year association with Martial Arts.  He commenced his training in 1968 studying Judo with Sensei Bob Corbett; later in 1969 he started his lifelong association with Mu Duk Kwan Tang Soo Do under the tutelage of Sensei Daryl Kelbar and later Dr. Frank Scalcerio.   He also trained kickboxing under Dr. Scalcerio and Arnis, initially Modern Arnis for eight years, training also with Remy Presas, Rodel Dagooc and Bob Fitten, who was the first person to bring Modern Arnis to Australia in the 1970’s.

Martin promoted the first international kickboxing tournament to be held in Australia, in Alice Springs in 1975, with competitors coming from California USA and Australia.  Sensei Bob Jones was a Judge at this first event.  Under Martins guidance his club competed and was involved in the promotion of 4 international kickboxing events in the USA and Alice Springs in the late 1970’s, as well as national Tae Kwon Do and other full contact competitions in Australia.  Martin incorporated wrestling into his clubs training program under the instruction of Mr. Noel Picken, who coached the South Australian representative Olympic try out team in 1956.

In 1985 Martin travelled to Cebu in the Philippines and was accepted as the first Australian Student of Grandmaster Cacoy Canete of the Doce Pares School, Martin was the first person to bring the Doce Pares system to Australia and was responsible for establishing the art in Australia.  In subsequent years he supported the development of Doce Pares Eskrima throughout Australia hosting Grand Master Cacoy Canete during many national seminars and tours throughout the country.

As a result of Martins guidance and commitment Martin’s students are testimony to his commitment with many students’ now Senior Instructors, Masters, and World Champions in their own right teaching in Australia, USA, and Indonesia promoting the style of his teachers and his appreciation of Budo.