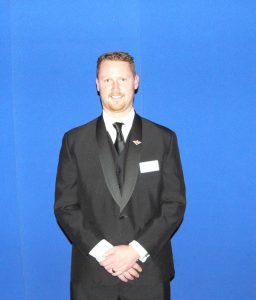 Budoka of the Year – United Taekwondo

In 1991 he moved to Canberra where his training continued. He initially trained with instructor Jim Vasakos moving to Instructor Brett Canning, in 1993, and he has been a loyal student ever since.

In 2000 Instructor Lachlan joined the Australian Army and spent 4 years posted to 3RAR, Australia’s only parachute regiment. During this time Instructor Lachlan completed an operational tour of duty of East Timor as the Timorese were gaining their independence. Whilst in the Army he completed the un-armed combat course and was recognised for his skill and ability and recommended for instructor in this area.

In 2006 Instructor Lachlan also started doing school programs. He completed the Australian Institute of Sports’ Community Coaching Course, through the Australian Sports Commission, and helped many school students gain more confidence whilst being active. It has always been a passion of his to spread the word about the benefits of all martial arts training and an active healthy lifestyle.

In December of 2007 Instructor Lachlan was promoted to 2nd Dan.

In February of 2008 he moved with Lauren Bartosh; his wife, and a 1st Degree Black Belt; to Wagga Wagga for work and to expand the art of United Taekwondo. His first dojang opened in February 2008 with 15 students in attendance. From there the Riverina region has grown to three schools, training 5 nights a week with over 70 students.
2008 also saw Instructor Lachlan start active after schools programs in the Riverina. The kid’s, teachers and parents loved all the training that was done. The kids loved it because they got to learn something new and they all love to kick and punch the bags and were allowed to shout “kiai” as loud as they could whilst doing so. The parents and teachers loved it for the fact that all the students were being active, learning, getting self discipline and learning how to treat each other with respect and didn’t know that they were doing that because they were having so much fun.

With the success of the schools programs in 2008 and bullying being such an issue in today’s society, instructor Lachlan decided to offer the anti bullying programs that Master Paul Mitchell has offered in Sydney with many schools taking him up on the offer for 2009.

In 2008 Lachlan was promoted to Chief Instructor of the Riverina.

At the start of 2009 Lachlan started training in Aikido Yuishinkai. He felt he needed to expand his knowledge to more than Taekwondo and has found that Aikido training has also influenced the way he teaches his Taekwondo classes. He thinks all martial artists should experience other martial arts not just their own styles as we all have something to offer each other.
2009 also saw Lachlan promoted to 3rd degree instructor.

In 2009 Chief Instructor Lachlan ran what will hopefully be the first of many training camps in Wagga Wagga with students in attendance from the Riverina, Canberra and Sydney. With close to 100 students attending, it was a huge success with many activities including United Taekwondo training, Aikido Yuishinkai for the black belts, High ropes course and low ropes course for confidence, Archery, Rock climbing and team building exercises and many more.

As well as being a carpenter Chief Instructor Lachlan now works in law enforcement as a correctional officer.