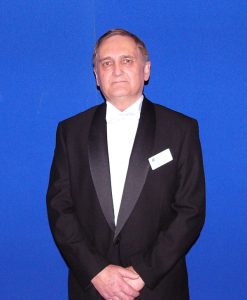 Hans J. Fricke , a qualified electrician and engineer, graduating in economics and industrial technology, migrated from his native Germany to Australia in ’64. Already at an early age he became fascinated with Japanese culture and at 19, after an introduction in to Judo, joined the Jiu-Jitsu Vereiningung Hannover. After having completed his engineering studies he worked in Germany and Egypt and next thing found himself on a Boeing 707 flying to Australia and working for the Snowy Mountains Hydro Electric Authority in Khancoban NSW; not as an engineer – but as a labourer.

After a dusty and back-breaking trip through the Nullarbor in an old beat up VW he arrived in West Australia where he had his first encounter with Karate in Mt.Tom Price – and loved it! And when in Perth would study Pencak Silat and Goju Karate under sensei Jan de Jong and Yasunobu Nagai sensei respectively.

After having worked and travelled throughout the South Pacific; Bougainvillea, N.Z. Western Samoa, Vanuatu, Papua New Guinea, Tonga etc. he refreshed his Judo skills at the Tokyo Nippon Kodokan; at the time the only place in Japan where a foreigner could train in Judo without the need of an introduction. Before returning to Australia Hans detoured into Korea where he had his first taste of “real” Tae-Kwon-Do in Pusan and Soul.

With a letter of introduction from the ITF HQ in Soul he, in 1970, met up with Tae-Kwon-Do Master Rhee Chong Chul in Perth W.A. And, for the next 8 years, became a personal and ardent student of his, opening the first Rhee International Tae Kwon Do training centre in Brisbane St. Surry Hills Sydney in ’73.

One day in Adelaide S.A., while skimming through a Military surplus store, he discovered an old Japanese WWII non-commissioned officers sword which he bought for $25!!! This shin-gunto, now displayed on a mantle piece at home, became a constant focal point, and more so, when introduced to the Willoughby Kendo Club in ’78. He immediately joined and, for the next 2 years, studied Kendo under Michael Payne and Ron Bennett sensei as well as Jodo under Paul Malloney sensei. Being one hour early one night he observed an Iaido class in progress with Dough Milton sensei and – to the chagrin of his fellow kendoka – joined Iaido.

During the 80’s he held the position of Deputy Chief Engineer with the Holiday Inn Hotel chain furthering his education at the Sydney Technical College and, involving himself in various community projects, was sworn in as a Justice of the Peace; serving his local community to this very day.

The ’90s brought more challenges when he joined the Aoyama Kenjutsu Kan in Sydney to study Toyama Ryu and Muso Jikiden Eishin Ryu and, as he also felt that a professional change would help to re-activate his interests in holistic and natural therapies he, for the next 4 years, immersed himself in the study of remedial massage, aromatherapy, sports medicine, Bowen Therapy, clinical hypnotherapy and acupuncture and, after having established the Sydney Bowen Therapy clinic in Dundas Valley, worked as a Natural Therapist and lectured natural therapies at college. All the while he continued learning and training in the Japanese sword arts; mainly in ZNKR Iaido; Shinkendo; Tameshigiri-Iaido; Sports Chanbara and Shinto Ryu Iai Batto Jutsu.

In 1996 Hans established the Sydney School of Japanese Swordsmanship at Dundas Valley NSW where he would teach Japanese swordsmanship and research the art of tameshigiri resulting in his team winning the 7′ Australian Tameshigiri-iaido Championships 2000 outright.

In 2001 his dream, to meet Shodai-soke and Hanshi 10th dan Nakamura Taizaburo, became a reality when he received a written invitation from Nakamura sensei to come to Japan and train at his Tsurumi dojo in the Military sword art of Toyama Ryu Batto-do. After having received Kyoshi nana-dan and given the title “All Australian Country Branch-Head” chibu-cho, he returned to Australia to establish Nakamura sensei’s Sei-Do-Kan dojo at Dundas Valley NSW.

This appointment caused much furore within the USA branch of the International Battodo Federation and irked some obscure individuals here in Australia, resulting in a concerted Internet attack on Hans and his mentor. To save Nakamura sensei any further embarrassment Hans returned both his dan and kyoshi certificates, saying that under such trying circumstances he could not accept them, but was immediately “ordered” back to Japan and, after extensive training, was granted kyoshi hachi-dan in Nakamura ryu Batto-do and given permission to represent Nakamura Ryu Battodo in Australia.

Sadly, in May the following year, Hans received the tragic news that Nakamura sensei had passed away and with it a request to attend sensei’s funeral in Tsurumi Japan. Honouring his promise to Nakamura sensei he has since dedicated himself to promote and teach Nakamura Ryu Battodo Happogiri To-ho in Australia.

Now in his 70’s and semi retired, Hans still practices on a daily basis and teaches Nakamura Ryu batto-do to a dedicated group of students at his dojos in Sydney, Australia.