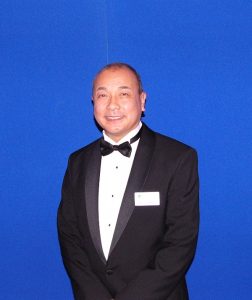 Instructor of the Year – Budokan Karate

Chris commenced training in the sport of Karate in 1971. Chris has had continuous involvement within the sport, as a competitor in club and state tournaments. He has also acted as a coach, chief instructor and administrator.

Chris has trained in several styles of Karate including Goju-kai, Kyokushin-kai, Renbukan and Budokan International and Australian styles.
It is in the Budokan style that Chris has achieved his highest rankings. Rankings are as follows:

Chris has been involved with the University of New South Wales (UNSW) Budokan Karate Club since 1983 as President of the UNSW Budokan Karate Club and Chief Instructor.
Over the 26 years, of which 24 years have been on a voluntary basis, he has trained in excess of 1000 local and international students. Of these students, over 25 have been awarded the rank of Sho Dan Black Belt. A number of his students have represented the club at Local, State and National Tournaments.

Chris has also been the Coach of the UNSW Karate team since 1992 and has coached over 300 students for the Eastern Conference Games (ECG). The Team has participated in the Eastern Conference Games for 12 years and has won the competition shield ten times spanning from 1992, 1996, 1997, 2000, 2001, 2002, 2003, 2004, 2005 and 2006. In addition, the UNSW Karate Club has hosted the ECG three times. This achievement again has only been possible with the support and assistance of Chris.  Apart from coaching and mentoring the University’s karate students, Chris has also participated in the considerable administration of the club. This has included participating in UNSW Sports Club forums and liaising with other UNSW Sports Clubs. Thus ensuring the Club adheres to University regulations and making submissions and recommendations on issues to the University Sport and Recreation department. He has also been responsible for promotion of the club throughout the University.

Active promotion and participation with the University has been essential to the Club’s success. Chris has regularly worked with the University Sport and Recreation department in reviewing applicants for the UNSW Elite Athletes and Performers program for the sport of Karate. There has been three Ben Lexcen Sports Scholars for the sport of Karate over the years as part of this program. The Ben Lexcen Scholarship students have successfully competed at State, National and International competitions. They have also been excellent role models for the other students.

In recognition of his contribution to Karate and to the University, Chris was awarded the UNSW Sports Recognition Award in May 2003. This award is bestowed only to those people who have invested considerable time and effort in their chosen field and have provided others the opportunity to participate in the sport within the University.

Chris is certified by the Australian Sports Commission (ASC) as a Level 1 Coach’ and has been since the commission initiated the accreditation procedure. As part of this coaching program Chris is currently a Mentor Coach for nine other ASC coaches and has mentored in total 20 other ASC coaches.

Always willing to provide advice and assistance Chris has also provided other Instructors ongoing help in the setup and administration of their Dojos.

As the Chief Instructor of the Club he has also assisted his students in becoming Australian Residents and has also accepted the responsibility of being a character reference for many students.

At age 56, Chris has not lost any of his enthusiasm or passion for the sport of Karate, a sport he began thirty-eight years ago.