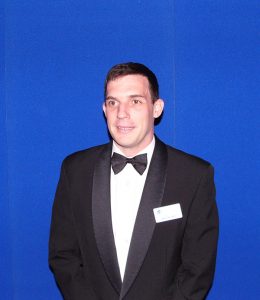 Cameron starting training in 1981 under Renshi Paul Reardon at the Boorowa Branch of the Peter Morton Academy of Judo Jujitsu Karate. He was introduced to martial arts when his father encouraged his eldest sister to attend training, being a firm believer in all women should know how to defend themselves. Renshi Reardon had an age policy in place at the time, but he allowed Cameron to join in, despite being several years younger, due to his obvious interest and enthusiasm.

By 1992 as a 17 year old Cameron was running the Boorowa branch as a senior Brown Belt. He did this for 6 months before being forced to close the club due to study commitments.

After graduating year 12 in 1993, Cameron moved to Canberra and began training again, this time with Shihan Peter Wilson (AMAHOF inductee 2001) and Sensei Glen Campbell at the Kaleen branch of the Peter Morton Academy of Judo Jujitsu Karate. Cameron had previously trained with Sensei Campbell while growing up in Boorowa.

In 1994, Cameron was nominated for the Black Belt Class and obtained his Shodan on December of that year, under the instruction of Shihan David Rowley (AMAHOF inductee 1999) and Shihan Edward Scharrer (AMAHOF inductee 2000). This was one of Cameron greatest accomplishments, as he had had to wait years to be in a position to obtain his Black Belt.

Cameron became head instructor of the senior class of the Kaleen Branch of the Peter Morton Academy of Judo Jujitsu Karate in 1997. This opened up a new chapter in Cameron’s martial arts career, as being in charge of a class rather than a student presented a whole new range of challenges and responsibilities.

At the end of 2002, the night before Cameron was to partner a student for their Black Belt grading when he was involved in a motorcycle accident. While stopped in traffic, a car hit him from behind. As a result of the collision, he suffered a fracture to a lumbar vertebra. Cameron had to undergo a major operation on his spine. He spent two weeks in hospitable, three months in a back brace and received physiotherapy for the next 12 months. Cameron is extremely lucky that his injuries were not worse and thankful for all the support that the Academy provided during his recovery. The high level of physical fitness that he achieved while training for his Black Belt, and maintained afterwards through martial arts, improved his ability to cope with the severe trauma and helped to speed up his recovery.

Over the years Cameron has been involved in all aspects of running the Academy. He has taken on various positions, including Treasurer and Grading Officer, and has organised and run seminars for both junior and senior students, women self defence courses, both at his work and at the Kaleen branch, and was involved in the 2003 AMAHOF event held in Canberra.

Cameron currently holds the rank of Godan continues to teach at the Kaleen branch of the Peter Morton Academy of Judo Jujitsu Karate and live and work in Canberra. He has made many friends through his years of involvement in martial arts and has learned discipline, commitment and respect. He hopes that through his continued involvement and teaching, he may come close to giving as much as he has gained.