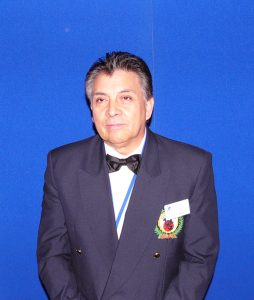 Sensei Alexander de Araya was born in Santiago, capital of the Republic of Chile in August 1949. From a very early age, he was interested in soccer and nearly made selection to the Youth National Team.  In 1964, he joined the Samurai Judo Club and practiced consistently for two years non-stop.

In the same year and by pure chance, he meet up with an old friend who happened to be the country’s first exponent to the art of Goju Ryu karate, and by his invitation, turned up at one of Sensei’s dojos to have a look. He joined the dojo right away and never looked back since.
In 1967 he completed his High School studies and entered University to pursue a career in Bio chemistry, but droped out a year and a half later because of lack of discipline and enthusiasm, deciding to travel instead to enhance his martial arts progress.

In 1968 he was called up to serve his country in what is called Compulsory Military Service and spend the next 18 months training with army paratroopers. Because of his background in martial arts, he is requested to teach what he knew at the time and a great time was had by all.

In 1970 he travelled to the USA and training in Goju Ryu karate with some of the American exponents of the time, before returning to Santiago to sit for his Shodan.

Between 1971 and 1973 he spent a lot of time travelling around several Latin American countries, and establishes contacts with senior instructors in Argentina, Brazil, Peru, Venezuela and Panama, many of whom are now part of the Association he created many years after.

Early in 1974 he travelled to Sydney as a skilled migrant in Electronics components, and starts working for Telstra (then Telecom) until the end of 2001. During this tenure he obtained various degrees in Communications and Digital Technology.

Sensei de Araya has spent a lot of his time travelling to okinawa and Japan to expand his knowledge of Goju Ryu karate and Okinawa Kobudo, and has been honoured by being accepted to train under the legends of the arts.

In nearly 46 continuous years of training he has managed to teach thousands of students in Australia and overseas, where he presides over the Kokusai Kenyukan Goju Ryu Karate and Kobudo Kai. He has also been fortunate to have scores of visiting Sensei from the Association countries training here in Australia.

Sense! de Araya started to develop Women’s Self Defence Courses in 1990, and has been offering these courses free of charge since. Hundreds of women have benefited from these free courses, and they have been an integral part of the School curricula until today. Some of the groups include students of the Mary McKillop College, Indian and Vietnamese women’s groups, Western Sydney Health Departments and soon to start, courses run for the Government House in Sydney.

A very community minded person, Sensei de Araya works closely with Fairfield City Council in the promotion of healthy lifestyles, anti-bullying and weight issues, and will continue to do so for years to come.

Sensei de Araya also travels continuously overseas to manage and promote the martial arts in other communities, and he is in constant demand for Seminars and international Gasshuku in many places around the world.

“There have been many other Masters I’ve had the pleasure to train with and learn from, but for the sake of space I would refrain from naming them here. In the process of discovery and research, I have been fortunate to have met several White Crane masters in Okinawa and Taiwan with whom I have created a link between my basic knowledge of Goju Ryu and the older versions of the Koryu. Thanks to this relationship I have been admitted to join the Australian Kung Fu Federation as well, and have been a member for several years.”