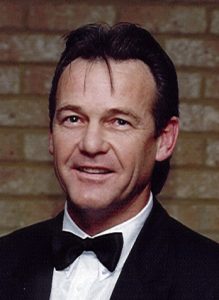 Inducted into the A.M.A.H.O.F.(Inc) for 2009
Services to AMAHOF and the Martial arts Industry

Inducted into the W.K.U.H.O.F. for 2009
Services to AMAHOF and the Martial arts Industry

Richard was born on the 13th September, 1957, in Perth Western Australia and is predominantly a family man married with four children and three grandchildren.

Community interests centred around Committee involvement, for example membership of Rostrum Western Australia Inc, an organisation that develops speaking and meeting procedure skills – holding positions of Treasurer, President and Chairman. The most self-satisfying being involved with his wife, Carole and family, registered and police cleared with the Department of Family and Children Services of Western Australia as Emergency Foster Parents. He has been involved in well over 100 placements. This community work involved caring for children, attended official & social functions and training relevant to foster caring.

Educational background from Kewdale Senior High School, Western Australia, Leaving Certificate (Year 12) 1974, scaling to College Certificates in Seamanship through to Sales & Marketing, studies at the Australian Institute of Management and studies in a Diploma of Management.

He began his martial arts training in the late 1970’s, having involvement in Karate and receiving instruction from the late Jan De Jong & Dave Green then more seriously training in Judo with the late Andy Fleming & son Drew Fleming and long-time friend & Judo mentor at the time, Ian Weaver within W.A. In N.S.W Judo he trained under instruction from Bruce Fagan at his Dojo in Cabramatta in the mid 1980’s and gaining recognition in NSW State Titles.

As with most good things in life taking so long to discover, with the spirit of perseverance and life experience, Richard has now found years later, advancement to Dan Grades & enjoyment with involvement and instructing in Jishukan Jujitsu and the martial art way at the Budokan Academy in Western Australia, with thanks to Hanshi Ramon Lawrence & close friend Victor Stuart. Along this journey he has supported and involved family members and close friends in the martial art way, and achieved Coaching Foundation of WA Accreditation as a Level 1 Coach.

The greatest influence in the martial art way being Hanshi Ramon Lawrence aiding study in Jishukan Jujitsu, Budokan Bujutsu, Iaido & Jodo. It was in the late 1990’s that Hanshi Ramon Lawrence appointed him to the Position of AMAHOF Treasurer. His journey with AMAHOF has had close associations and support to Inductees from 1999 like Dave Rowley & Sue Reid, year 2000 Craig Swingler & Ed Scharrer, year 2001 close friend Zlatko Peter Kitak & Wayne Hanley, and so many more Inductees have been supported by Richard, and so many more Inductees will be supported by him into the future. Richard has also received and provides the mutual respect and support of Senior AMAHOF Executive Grandmaster’s Barry Bradshaw & Peter Morton for well over ten years.

Richard confidently believes he has the attributes required to effectively carry out the responsibilities of the Treasurers position of the Australasian Martial Arts Hall Of Fame (Inc). In particular he has a high regard for Communication, Planning skills and High ethic and moral values. Since being appointed as Treasurer of AMAHOF in late 1998 the years have quickly passed seeing many changes, much behind the scenes work and assisting many of the Inductees to satisfying their individual Induction.