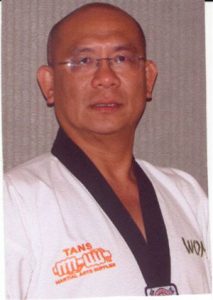 Inducted into the W.K.U.H.O.F. for 2009
Martial Arts Supplies – Taekwondo – Judo

My name is Ech Neng Tan (Peter Tan) I was born in Cambodia. In 1956 after my father passed away when I was only 3 years of age, my mother was left with two children and one on the way, she sold vegetables in the local market to look after us all. That is where my martial arts was started, I was getting beaten up every single day by the other boys in the market until one day my neighbour who was a Cambodian Boxer started to teach me to defend myself. Soon after that I started Judo until I become a Judo assistant teacher in 1962. Being the youngest and smallest in the club teaching the others, the nickname I was given was Phnom Doun Penh’s grandson after that the club name was called Phnom Doun Penh which was taught at the college. I also taught at the police academy centre and in 1964 I started Karate and Tae Kwon Do. After 2 years I left Karate and stayed with Tae Kwon Do until becoming a teacher in 1966 at the police academy centre.

1970 -1973 With the civil war between the students and the government. I left Cambodia’s capital Phnom Penh and fled to Cambodia’s border Pailin where I was teaching until the communist took over in 1975. Today there are students from Cambodia living in Melbourne, Sydney, Adelaide and Queensland, some are masters. They are all under the Phnom Doun Penh’s Dojo.

After three months under the communist control I escaped with my four students to Thailand with the idea to live and teach there, little did we know that there was a refugee camp at the border which was run by United Nations. We stayed in the camp and I also taught there and was appointed by the UN to control the safety for SA KOA refugee camp.

On 19th March, 1976, I arrived in Australia, two weeks later I was at the Nunawading Judo club next to my refugee centre, and there I started to teach again. I came across Sensei Bob Todd and Ivan who brought me in to help them teach in the Brunswick club and John Watson in the Northcote Judo club.

In 1980 I won the Judo open tournament in Canberra, soon after that the JFA President sent me to teach at Norwood High School in Ringwood. My Phnom Doun Penh Judo club started once again here in Australia. I also then taught the Ringwood CIB Police.

In 1988 two of my students were selected in the Seoul Olympic team, Neil Whitehead was the Olympic Judo coach for 2008.

My other student Mark Oliver won the Judo open championships in 2007 and 2008.

My Tae Kwon Do class started in 1982 and now my student Tim Huggins is 6th Dan and is the fighting technical director for Tae Kwon Do Victoria. Many of my other students are now masters in different martial art styles (ie: Aikido, Wing Chun, Cambodian boxing and Kyokoshin) they are all very well respected members of the martial arts community which makes me proud to know that I have shaped and influenced them to have adapted martial arts to their lifestyle as I have to mine. Currently I still teach 4 to 5 days a week for the passion and the love, its life.

Because of the love I have for martial arts, I left my computer programming occupation to open a martial arts business. On the 1st June, 1984, Tans Martial Arts Supplier was established. I would like to thank my wife especially who started with me from the very beginning to help run the business to what it is today, after getting married she has been doing Judo and Tae Kwon Do on and off for 33 years, also my children who started training when they were of 4 years of age. My only son Philip Tan won the Tae Kwon Do junior division three years 1991, 1992 and 1993, now even my daughter in law is also a martial artist. These are the people who support and work hard to keep Tans running 25 years as of 2009. We use our martial arts discipline to serve the martial arts community. I now can see the next generation of Tans Martial Arts Supplier approaching, with the same passion for martial arts the way I have always felt. Thank you all.