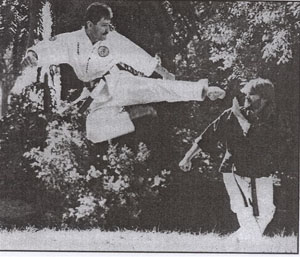 Inducted into the W.K.U.H.O.F. for 2009
Martial Artist of the Year – Karate Jitsu

Inducted in the Gallery Hall of Fame, 1995 Cleveland, USA

Holder of Numerous Titles in Full Contact Karate, Kata and Self Defence)

Former Secretary of the United Karate Federation of Australia

Sergeant of the NSW Police Force

Featured in Movies: ‘The Punisher’, ‘The Saint In Australia’ and ‘Harborside Beat’ and many other television films.

Featured in Numerous Newspapers (including front pages) as the ‘Karate Kop’, and in Martial Arts and Police Magazines.