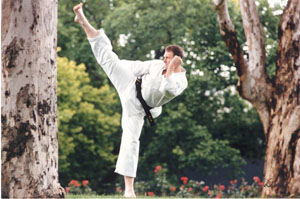 Inducted into the A.M.A.H.O.F.(Inc) for 2009
Instructor of the Year – Seido Juku Karate

Inducted into the W.K.U.H.O.F. for 2009
Instructor of the Year – Seido Juku Karate

At the age of 22 he joined the Victoria Police Force and in 1983 while stationed at the Geelong Police Station two of his fellow police members were 2nd Degree black belts with Kyokushin Kai and they started up a Police Martial Arts Dojo. This dojo closed within a year, but Darrell continued to train with a number of schools throughout the Geelong and Lara area. During 1984 Darrell hurt his knee and had to give up karate for a short time.

He returned to Kyokushin karate in 1985, but was in constant contact with the then Sensei Mervyn Nelis (AMAHOF 2003) who was with the World Seido Juku Karate Organisation and in April of 1986, Darrell started training with Seido Juku.

In 1988-89 Sensei Mervyn and Darrell attended at the World Seido Juku Karate Organisation Honbu in New York where they trained under Kaicho Tadashi Nakamura for five weeks, during this period Darrell was promoted to 1st Kyu with a recommendation to go for his Shodan in December 1989.

Darrell was promoted to Shodan in December 1989 and was on top of the world, he was fit and strong and everything was going great, until the 23rd of January 1990 when as an instructor for the Protective Security Group on a witness protection course during a camouflage and concealment exercise out the back of the Melbourne Airport. Darrell was wearing a sniper suit with large amounts of hessian and scrim attached to it. He was hiding on a river flat with the students standing above on a roadway. They were trying and locate him, however it is extremely hard to do so and as part of the exercise he was required to let off a blank round. On this occasion the grass caught on fire, which quickly engulfed the suit. Darrell then began to roll over and over with the suit fully on fire, after he heard one of instructors yell out “Get the fire extinguisher we can’t put him out!” It was at this stage that Darrell decided to save himself by running to the creek ten metres away, but had to get through thick scrub to get there. He was fortunate to reach the creek and the flames were extinguished. This resulted in him receiving 3rd degree burns to his hands, buttocks and backs of his legs. Darrell then spent the next month in the Royal Melbourne Hospital Burns Unit, where he underwent skin grafts. During this period he could not even bend over and touch his knees and was told by the specialist that he would never do karate again. Within six weeks of the accident he was back at karate even though he could still hardly walk. It took about eight months of hard work to fully return to a point where he was back to full training.

In February, 1990, Darrell opened the first branch of Seido Juku in Melbourne at the Carlton Baths Community Centre; he started with 2 students and built up the school to a point where he was looking for bigger premises.

In 1992 Darrell was graded to 2nd Degree Black Belt just prior to attending with Sensei Mervyn and five other members from Australian Seido Dojos at Honbu in New York where he again trained for four weeks under Kaicho Tadashi Nakamura.

In 1994 Senpai Darrell discovered a large space in a warehouse at the Victoria Market. Long hours of tedious work followed in order to prepare the building for use as a dojo – tearing down walls, putting down a timber floor, erecting change rooms, toilets and showers, painting – until after 3 months it was ready for use. On the 18th February 1995 it was officially opened.

October 1996 Senpai Darrell attended with his son and daughter to the 20th anniversary of the World Seido Karate Organisation in New York. This event was attended by many hundreds of Seido students from around the world. To mark this occasion a World tournament was staged and Senpai Darrell participated in the over 40’s Senior Heavy Weight Full Contact Division where he gained 1st place.

On 1st November, 1999, Shihan Mervyn announced that he had severed ties with the Seido Karate Organisation in order to form his own style – Zenshin Karate. Being Darrell’s mentor and inspiration since joining Seido Juku, he felt that he had to follow Shihan Mervyn in his new direction. Darrell was torn between the two styles and with great regret he resigned from the World Seido Juku Karate Organisation.

In 2000 Darrell was Graded to 4th Degree Black Belt and gained the rank of Sensei.

In 2002 Darrell attended the 1st Krav Maga Instructor’s Course which was held in Sydney, this is a unique system that has received international recognition as an innovative, effective and highly practical self-defence and fighting method. This recognition has come largely from experts in Martial Arts and hand-to-hand combat instructors from tactical units around the world, operating in civilian, law enforcement, and military contexts.

In April 2008 after being with the Zenshin Karate Organisation for 9 years, Darrell approached the World Seido Juku Karate Organisation where he humbly made a request to be reinstated to the Organisation. As part of the request he resigned from Zenshin and was demoted to 3rd Degree black belt and he has been requested to attend at Honbu in New York in March 2009 where he will be fortunate to be graded by Kaicho Nakamura.

In his role within the Victoria Police Force, his karate training has assisted him in enhancing his awareness, abilities and development in self defence for Close Personal Protection (CPP) and he has been very fortunate to have performed CPP on numerous Dignitaries over the past 19 years, some including: –

Darrell has also been responsible for the following dignitaries during the Commonwealth Games 2006 (Comm/Games 06) where he was classed as a Venue Commander of the VIP Uniform Presence which was tasked with the police uniform response to ensure that these dignitaries safely gained entry and exit to all venues that they attended during the games. Some including: –

Her Majesty the Queen, Queen of Australia (Comm./Games 06)

He has also been responsible for organising the personal visits of: –

He has extensive qualifications in a variety of areas. Much of the knowledge and skills he has acquired, he now incorporates into his karate training. Qualifications he has undertaken internally and externally are: –
Close Personal Protection Course, 1989.

Promoted to the Rank of Sergeant 1994.

Promoted to the Rank of Senior Sergeant 2003.