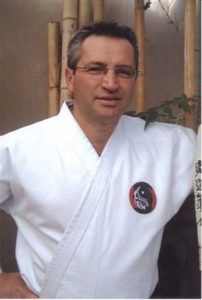 Inducted into the W.K.U.H.O.F. for 2009
Instructor of the Year – Zen Ki Budo Ryu Karate-Do

I am 49 years of age and have studied Karate-do since 1975, married with two children and aim to live a life of balance between, Family, the Martial arts, my real job Zoo keeping and music. Zen Ki Budo Ryu Karate-do is a blend of Shorin-ryu and Goju-ryu Karate-do, I have always taken my study of Karate-do seriously and have always taught the art with great pride. I started my study of karate-do simply because it fascinated me and was fortunate to have excellent teachers that taught me that kicking and punching is only the mere tip of the iceberg in the Martial arts and that Karate-do is a life long study. I could never see myself quitting Karate-do even from the start and there are so many aspects to my life that would have been different if I didn’t choose this path. I would probably not be teaching if I didn’t have the great support from my wife Nives and my children Melissa and Paul.

I was taught traditional values of Martial arts by my main teachers, the late Shihan Paul Guerillot and Sensei Alf Scibilia, who taught and graded me in Shotokan Karate-do and a style of Savate that Shihan Guerillot developed ‘Foot and Fist Boxing’. His focus was always the Zen and spiritual aspects of karate-do and other Martial arts he taught. I was very inspired by his teaching and hence followed his philosophy on Karate-do as an art of Zen and a form of Yoga.

I therefore teach this same philosophy to my students and will make this clear to the new student from the very beginning. I also believe that the deeper aspects of our art must be at the forefront of teaching rather than for the higher levels and this of course can be a real challenge for any level teacher.

My aim in my teaching is to introduce the general community to the Martial arts, many of which would not normally join a Karate Dojo. I have found that everyone has an inherent want and need to feel part of the natural world and experience Zen. I aim to promote the Martial arts in particular Karate-do by running a short introductory course the ‘Tao of Animals’ program. I run this program at the Melbourne Zoo where I have been an animal keeper since 1981 and anybody is invited to come along no matter if they are experienced in any discipline or complete beginners. It is mainly a program aiming to describe Chi and Zen and how to connect to nature by very simple movements derived from the observations of many species of animals.

Zen connects us all and by explaining my experiences with the animals over the years and relating these to Martial art philosophy, I find that people go away with a better understanding of the true meaning of Budo and of my interpretation of Karate-do. Being a Zoo Keeper has given me the unique experiences that many of the Zen Buddhist monks that Bodhidharma led to the Shaolin temple from India. I’m sure they observed many animals on this journey and I have been fortunate over the years to work with many of these animals such as the Tiger, Snow leopard, Crane, bear etc. The program is practiced outdoors in many areas around the zoo where people can get up close to many animals. It is based on a book I wrote for my students ‘Animals and the Martial Arts’.

Teaching regular programs on the history and origins of the martial arts through the innovative program ‘Tao of Animals’ based at Melbourne Zoo.

Completed writing the book ‘Zen Ki Budo Ryu Karate-do’ a teaching reference for members on our style and all its aspects. This project was the result of three years work.

Completed writing the book ‘Animals, the environment and the Martial arts of Asia’ for use in teaching the Animals and Chi Kung program and as a reference to members.

In conjunction with the above book the running of various courses and talks on the above subject. The Animals and Chi Kung program was delivered as a short course to adults and teenagers at the Melbourne Zoo. It aimed at interpreting the origins of the Martial arts and its philosophies and is also an innovative way to introduce people to the practice of the Martial arts.

Spent the next year analysing personal philosophy on the martial arts and the direction I would take.

Wrote and re-wrote the training syllabus based on traditional teaching concepts and techniques.

Ran a ten-week Corporate Karate-do course (focusing on self-defence) for Staff at the Melbourne Zoo.

Wrote a book on Shotokan Karate-do.

Wrote a book on Foot and Fist Boxing.

Opened a Dojo at the Mill Park Primary School and taught Shotokan Karate-do under Shihan Paul Guerillot. Ran this Dojo for two years.

Graded to Nidan in Shotokan Karate-do by Shihan Paul Guerillot.

Trained regularly at Shihan Paul Guerillot’s Dojo in Richmond in both Shotokan Karate-do and Foot and Fist Boxing. Also assisted with teaching and helping with public demonstrations.

Graded to Ist Degree in Foot and Fist Boxing by Sensei Alf Schibilia.

Commenced training at Shihan Paul Guerillot’s Dojo in Hawthorn, Melbourne in the art of Foot and Fist Boxing.

After being inspired by Bruce Lee movies I was encouraged by close friends to join a local Karate club headed by a green belt and a brown belt in a breakaway Goju-ryu style. We didn’t like the attitude of these unqualified students and we encouraged Sensei Alf Schibilia (a Science and Physical education teacher at our school) to open up a Dojo at our school St Josephs Marist Brothers College North Fitzroy. Due to being students at the school we were able to train for free for sports day once a week and then twice a week after school attending normal Karate-do classes.

Godan in Zen Ki Budo Ryu Karate do: 29th October 2006, graded by Hanshi Tony Jackson 10th Dan (Okinawa Shuri Ken Shorin Ryu Karate-do Kokusai Kyokai) in Western Australia. This grade included assessment for Yondan due to 10 years since last grade. Unable to be graded previously due to inappropriate/incompatible/unavailable organisations to be affiliated to.