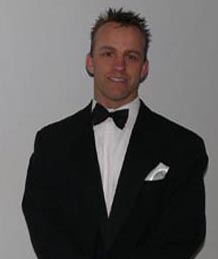 Inducted into the A.M.A.H.O.F.(Inc) for 2008
Instructor of the Year –  Peter Morton Karate – Jujutsu

Inducted into the W.K.U.H.O.F. for 2008
Instructor of the Year –  Peter Morton Karate – Jujutsu

My name is David Edward Burgemeister I was born in Norwich England 1971 Making me 36 years old. I live in Gordon Canberra ACT with my Wife Michelle, my 3 year old son Jackson and our Labrador cross Charlie. I have been with my wife Michelle for fifteen years and we finally married on Remembrance Day 2000. During this time we have lived in a number of places and have traveled extensively throughout Australia, United Kingdom and Europe.

I work as Radar and Communications Technician for a prospering Research & Development Company in Canberra (CEA Technologies) My Job is demanding it requires me to travel both nationally and internationally, but after 11 years I can say I still love my job. My other interests include Water Skiing, Reading, Cooking, Surfing and Weight-training.

I started Training with the Peter Morton Academy of Jujitsu, Judo, Karate in 1987 when I was 16 years old. I started to get involved in Martial Arts for 2 reasons:-

The first was being insecure about my ability to defend myself, and the second reason was my mate’s father was an instructor at a successful PMAJJK Branch. Playing Rugby Union and Cricket for the School, plus attending regular Gym sessions increased my fitness and strength however being short always made me feel insecure about defending myself if the need arose. I enrolled with the Evatt PMAJJK Canberra Branch in 1987 under the instruction of Sensei Graham Darby. Over the next five years I progressed from white belt to brown belt up until 1992 when I was nominated to undertake the eighteen month black belt coarse. During the same year I also started regular Boxing lessons at the Police Citizens Youth Club at Turner ACT under coaches Ken Bradley (Australian Lightweight Champion) and Godfrey Stevens (Chilean Lightweight Champion). In 1993 I started the Black Belt training course under instructors Shihan David Rowley and Eddie Sharrer. After a grueling eighteen months I successfully graded for my 1st Dan Back Belt in December 1994.

In 1995 I had my first Amateur Boxing fight after which my wife and I traveled overseas returning at the end of 1996. On my return from overseas I started the Turner PCYC branch and also began coaching junior boxing classes at the same venue. Also in 1997 I was honored to be asked to become the Chief Black Belt training instructor for the ACT region.

In 1998 I started training with the PCYC Wrestling Club to enhance my grappling and Judo skills under ex-Polish national coach Withold Rejlich and Dual Olympian Ben Vincent. After representing the ACT in numerous local and interstate competitions I competed at the Australian Wrestling Championships (2000 Olympic tri-outs) in Melbourne.

To further enhance my Judo, Jujitsu skills I commenced training with Judo Federation Australia at the Marist Judo club under Australian Champions Tom & Steve Hill. During which time I represented ACT Judo at numerous local and interstate competitions including 2002 and 2004 Australian Judo Nationals.

I have also attended various National Judo AIS training camps. I currently hold a Brown Belt and I am still competing and training with the Marist Judo Club.

my branch as well as the Black Belt course.

Even after 21 years of being involved with the PMAJJK I am still as excited, passionate and motivated as I was when I walked into my first Martial arts class when I was 16 years old. I am deeply committed to being the best I can be and always ensuring that the people around me get nothing but the best from Me.!!

Also to be sent as original with documentation.