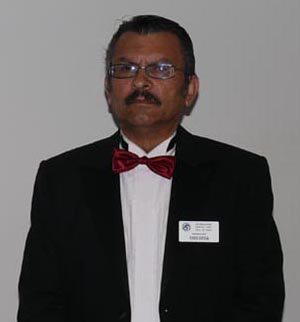 Shihan (as known to his students), recently given the title of Kyoshi, first became a student of martial arts in England. Shihan immigrated to New Zealand in 1964 and has spent the last 44 years teaching the art of Karate-Do in various different styles, such as Okinawa Te, Shotokan, Kyokushinkai, Inyoryu Kempo and Ashihara Kaikan. Shihan has trained under many great Japanese instructors, notably Kancho Hideyuki Ashihara.

Shihan was Branch Chief of Ashihara for 14 years, until the passing away of Kancho Ashihara, and most recently under Master Kancho Yoshitoshi Sato. Over the years Shihan has trained internationally with many people who have enriched his learning of karate, such as Shoichi Isa (Goju Ryu All Japan Champion), Hirotsugu Miki – Kyoto, and Takshi Segausa  Goju Ryu.
Shihan started his dojo in a small garage situated in Mt Eden. Training was very hard and physical. The style originally Okinawa Te Karate Do, was very successful in attracting different groups of people from all walks of life. Back in the early 1970’s Shihan Dessa left New Zealand with his young family, for Raratonga. This was an excellent opportunity to introduce Okinawa Te Karate Do to the Cook Islands, resulting in a very successful Karate tour of Tahiti. Returning to New Zealand after two years, Shihan Chris wasted no time in setting up a Dojo in a number of school and church halls in Auckland. Ready to change with the times, and looking for new and improved methods of teaching karate, the name and style changed to Ashihara Kaikan in the late 1980’s. The word “œsabaki” was born, the style still physical, with techniques cleverly incorporated by the late Kancho Hideyuki Ashihara, to move around the opponent, in order to defend oneself.

With all the knowledge gained Shihan Dessa has formed Seishin – Ryu Karate and developed the technique Tai-Sabaki-Tanren opening his own Dojo under his newly created style in 1999. Shihan has undertaken a number of trips overseas with his students, all of which have seen success, both in martial arts and personal motivation of his students. Following his most recent trip to Japan with his students in 2007, Shihan saw the benefits of combining the traditional martial art into his Seishin – Ryu syllabus, and has affiliated with Seishin Kan Renmei.
A great number of Shihan’s students have been successful, whether this be in business, their personal and professional lives or in tournament, the highlights of Shihan’s students in tournament being the Kyoto Inyoru Cup 1984, South Pacific Championships, Rarotanga Cook Islands 2001 & 2004. Seishin Kan Renmei, Fukuoka Japan Cups, both for Male and Female Black Belts, July 2007, and numerous national titles. Shihan is also a member of the New Zealand Martial Arts Hall of Fame.

What draws and attracts students and total strangers to this man? Small in stature, big in heart, Shihan Dessa has an aura about him that keeps the student interested at all times, allowing their minds not to wander, and stay focused on what he is teaching. He has a simple and unique style of teaching and utilises his body dynamics with ease, making difficult techniques look somewhat easy. Preparation in teaching karate is vital, and this starts at home planning lessons, analysing new techniques and combinations. Years of experience and wisdom has given Shihan Dessa balance with teaching his students, not only the physical side of martial arts, but also the spiritual side, through meditation.

Instructors and students have their own reasons for choosing to learn Karate-Do, and Shihan Dessa has the ability to bring out the best in an individual, his talent to teach often resulting in the student wondering how they have learnt what they have, and how they have become who they are. This gift is rare.