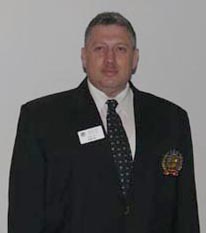 Inducted into the W.K.U.H.O.F. for 2008
Martial Artist of the Year – Goju Karate

Alex Alt was born in Melbourne, Australia, on 13th July, 1960 and is married with two children and currently living in Nerang, Queensland. He attained the level of 5th. Dan black belt Master Instructor – Shihan rank Goju Karate in 2005. His interests are Martial Arts, World Rally Racing and Football.

It has been stated that only the most dedicated and tenacious of students will reach the rank of 1st Dan, Shodan, the initiation, or the very first level of the Black Belt ranking system.

Only a handful of those will then go on to obtain the rank of 3rd Dan, even fewer will gain 4th Dan Jokyo THEN Sensei and then Renshi, however it is from the 4th Dan level of achievement that the few dedicated karate-ka who will eventually gain Master status are chosen. Within this ranking system is embedded a hierarchical level of seniority regarding Shihan status. The highest of these is Hanshi usually awarded at 8th 9th or 10th Dan and only to the very most senior members both in age and experience, of the Association or Dojo.

Renshi and Shihan is the first level within the Shihan ranking system and can be awarded at 5th Dan.

Karate-ka who practice for approximately 12-15 years under the direction of a Shihan, Master Instructor, can reach the rank of 3rd Dan-Sandan.

This ranking leads to the qualification of Shidoin, Assistant Instructor.

Fourth Dan-Jokyo, Fifth Dan, then Shihan and above are ranks awarded to very few individuals. Usually, recipients of such grade levels have devoted the majority of their life time to the study of Budo in various forms, and have made outstanding contributions to the chosen art concerned.

Alex Alt has produced 200+ Black Belts in Victoria, some of these students have represented himself and Karate organisations in local, state, national and international competition. Some of these Black Belts have also become instructors, opening schools , under his direction and consultancy with strict guidelines.