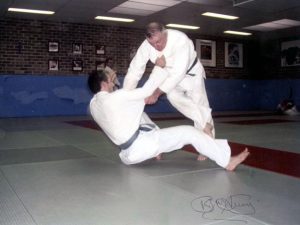 Sensei Ken McAviney has studied judo since 1961. He has served on the committee of the Black Belt Register and was president of the University of New South Wales Judo Club and served as a coach at Sydney University.

Ken is a married man (33years) with two children, one of whom is a judo Dan grade trained in Japan.  Ken has been a self employed chiropractor and osteopath for 29 years. He was senior lecturer in Orthopaedics and Neurology (1979-82) then Clinic Head (1983-5) at The Sydney College of Chiropractic. He was a member of the Board of Examiners of the College from 1979 to 1990. Ken was also the winner of the Knox Medallion from The Sydney College of Chiropractic in 1987 “for outstanding service to the College”.

Ken has been a member of the Advisory Board to the Department of Health and Chiropractic at Macquarie University for the last nine years and was chairman for three and a half years, and is currently Vice Chairman. He has been a Member of the Board of Examiners of the Department since 1990.

Ken has given many presentations to the profession and authored many publications.

His interests include singing (jazz and cabaret), stonework, boating and writing.

In 2006 Ken McAviney was made a Life Member of the Sydney University Judo Club.