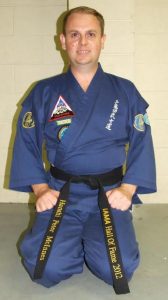 During my teenage years I was active with the Surf Club, soccer, swimming and martial arts, studying under Maggie Phillips from 1984 until 1990, attaining junior black belt (San Chi Kai) in 1987. This was encouraged by my grandfather Eldert van den Enden, who taught jujitsu in Holland before WWII. My grandfather was asked by the master to start a school in Ulverstone Tasmania in the middle of the last century but could not afford a new uniform and other related expenses, so another instructor took this opportunity.

At the suggestion of family I joined the army at 17, resigned after injury (partial deafness, lower back, glaucoma). I graded to Kyoshi level in 2006, under Soke Mal Lomax (Grandmaster, black belt 10th degree), long-time friend and mentor. Having studied San Chi Kai (Tibetan-based self-defence/freestyle karate, under Soke Mal Lomax), Ma Chung Lama Pei Kung Fu (under Grandmaster Mal Lomax), San Ryu Do (Japanese sword under Grandmaster Dr Robert Braff), Seishin Ryu Do (under Shihan Paul Gray), Kyushokan Martial Arts Academy (under Shihan Mike Watson) and the International Self Defence Association under Master Graham Healy. I have competed in tournaments at local, state, national and international levels in the areas of demonstrations, unarmed forms, weapon forms and sparring. I have been the Queensland State Head for San Chi Kai since 2001, bestowed upon me by Soke Mal Lomax the Founder. I was inducted into the Australasian Martial Arts Hall of Fame and World Karate Union in 2006 for superior leadership, teaching performance, dedication, personal achievement and continuous contributions to the martial arts community over past decades. I attained eighth degree from  Soke & recognised by the International Self Defence Association in 2012, having been an active member since 2008.

From 1995 until 1999 I was studying at seminary, taking the calling of God to ministry seriously. I was encouraged by my grandparents to become active in ministry as a priest. In 1997 I became a Justice of the Peace (Qualified). In 1999 I graduated with a Bachelor of Theology, but this degree has not helped career prospects as much as I would have believed. In 1998 I was ordained as Youth Minister with a Pentecostal church and received full credentials in 1999 (able to administer the sacrament, bury the dead, conduct baptismal services, perform marriage ceremonies and promote the gospel). In 1999 I was commissioned into the Queensland Naval Brigade Officer Corps as chaplain, promoted as superiors chose. In 2002 I was ordained deacon and to priest in 2003. 2005 saw me accepted into the Order of Saint Benedict (O.S.B.).

In 2006 I was consecrated into the Episcopate as Bishop in Queensland for the Anglican Independent Communion Worldwide (AICW), the Grand Prior for Australia for the religious Order of the Companion of Jesus and awarded a Doctorate of Divinity (Honoris Causa) for service to AICW in Australia. In 2007 I was voted Chancellor for the Anglican Independent Communion Worldwide by the International College of Arch-bishops (2007-2008) and awarded a Doctorate of Canon Law (Honoris Causa). In 2008 I was elected Archbishop and Presiding Bishop for the Anglican Independent Communion Australia by the International College of Archbishops. 2011 I received a Doctorate in Ministry (Honoris Causa) from the UK for services rendered. 2014 I received a Doctorate of Humane Letters (Honoris Causa) from UK for ministry services to Torres Strait. In 2014 I was accepted into the Chivalric Order of St Alban the First English Christian Martyr, The Ecclesiastical Knight Defenders of the Faith, the Affiliated Christian Orders of Chivalry, the Venerable Order of Soldiers of Christ, the Military and Religious Order of St Cornelius the Centurion as well as being awarded the Ecclesiastical Noble Title of Archduke of Capernaum by Metropolitan Archbishop Dr Norman Dutton. I have been a leader with Royal Rangers since 2005 mentoring Youth and chaplain since 2013 until 2016 when the outpost was disbanded.

Since then I have been studying part-time, working casually and doing volunteer Chaplaincy at the real RSL, not the services club most people think of. I have helped veterans/families apply for pension, welfare and military compensation claims for our aged veterans. Occasionally I drove the RSL bus and performed funerals for veterans as required. I have assisted in coordinating ANZAC, Remembrance Day and other Memorial services for the RSL. This project management involved liaising between community groups, emergency services, schools and military to ensure the activities progressed appropriately.

I still teach martial arts in Queensland some evenings and have taught self-defence to women at different schools/TAFE, as I have in the past in Tasmania and Queensland. In 1995 I passed exams for National Coaching Accreditation Scheme level 2 coach. I have been a judge for the National All Styles (NAS) tournaments from 2008-09 and Australian Martial Arts Championships (AMAC) from 2011, Sports Coach Presenter for the Martial Arts Industry Association and Australian Kung Fu/Wu Shu Federation until 2010. I have attained a Diploma in Training and Assessment Systems (2002), Diploma of Business (Administration) (2002), Diploma of Business (2005), Diploma of Business (Human Resources) (2006), Diploma of Sport (Coaching) (2007) and (upgrade 2013), a Certificate IV in Workplace Management (2001) and a Certificate IV in Training and Assessment( 2008) and (upgrade 2012). I am currently studying Sport Science, with the intention of using the knowledge gained to assist my personal development as a coach, to the benefit of my students, later aiming to finish a degree in Psychology.

A friend started a company with the aim of raising money for orphans in the Philippines. In Australia it is difficult to starve, but in the Philippines there are no Centrelink benefits or as many welfare agencies as we have here. I also choose to partner with local missions such as street ministries feeding the poor to assist those in our local community whom are in need, Princess Project in Cambodia (where they take children out of potential slavery into school & job study programs to establish careers for them, their families & communities) as well as the Ukrainian orphanage of Mykolaiv. Given this, I use my skills and resources to help those who can not help themselves as we can. This is my way of giving back to society (as with volunteer work with aged veterans, the homeless/hungry and helping orphans) what I have learned.