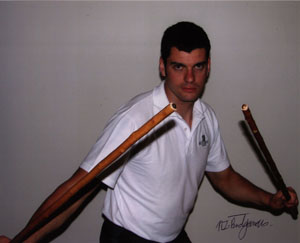 Nigel Bridgeman commenced Savate at an early age under his father, Terence Bridgeman, and later under the guidance of Colin Pestell. Nigel is a senior instructor in Australasia conducting classes in Savate, and its weaponry disciplines, and Women’s specialised anti rape courses.

In 2002 he was part of a four man delegation sponsored by the “Federation Francaise Savate de Boxe Francaise” to visit Paris. The youngest of the group, he underwent extensive training and education in some of the most diverse of the Parisian schools.

Nigel has had the rare opportunity to have met or trained with a wide variety of Savate masters and disciplines at an amateur and professional level. This experience has given him a solid foundation in the classical and modern approaches of Savate and its associated unarmed and armed disciplines.

He has been an instrumental instructor in promoting, participating and arranging demonstrations and has been mentioned in a number of articles and magazines.

He envisages his continuance and promotion of the disciplines as an educational and recreational form of personal combat.