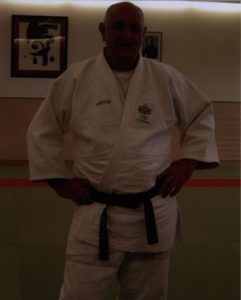 Sensei Milos Kovacik was born in Slovakia and raised in the Czech Republic and started Judo aged 16.

Subsequently he went on to win 10 National titles and represent his country in the European and World Championships between 1969 and 1976.

In 1976 he again represented Czechoslovakia as a member of the Olympic Team at the Montreal Olympics.

Due to this consistent excellence as a competitor at International level the Czechoslovakian Government honoured him with a Masters Degree in Martial Arts.

In 1980 he migrated to Australia and enjoyed continued success with Judo during the next 9 years winning several Gold medals during this time at the Australian National Titles.

In 1990 he visited Tasmania for a Judo Seminar, returned for a holiday shortly after and made the decision to relocate from Sydney where he lived with his wife of 37years, Dagmar. They initially lived on a rural property South of Hobart but recently moved closer to Hobart to be near the University Dojo.

In 1993 he rekindled interest in Judo at the University and re-opened the Hobart University Judo Club. In 1996 he was named the State Junior Coach for Tasmania, a position he held until 2002.

The years between 2002 -2004 were spent preparing the Australian National Team for theAthens Olympics. In 2004 he became the Tasmanian Senior State Coach and also that year he was appointed as the National Men’s Team Coach for the 2004 Athens Olympics. In 2006 Milos hasbeen travelling extensively through China, Japan, and Korea as Australian National Coach helping to develop the National Team.

Despite this demanding schedule he still manages to hold down a full time job and train at least 3 times a week in 2 hour sessions at the University Dojo.