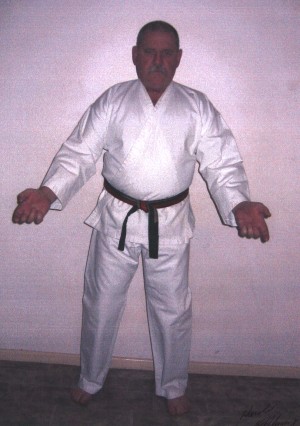 Inducted into the A.M.A.H.O.F.(Inc) for 2006
Instructor of the Year – Anderson Bushi Kai

Inducted into the W.K.U.H.O.F. for 2006
Instructor of the Year – Anderson Bushi Kai

Hanchi Ken Fleming is 54 years of age and married to Dalene for the past 30 years. Together they have five children – Michael 25, Anthony 23, Nicole 20, Steven 18 and Jessica 14.

He works full time as a Service Technician – Supervisor for an international forklift company in Brisbane for the past 15 years. He also works part time as a security supervisor at Brisbane Entertainment Centre – He has worked in security for 34 years.

Ken has held a Security Guard – Crown Controller Licence since they became mandatory. He also has a Blue Card to enable him to teach children. This is a Queensland State Government Requirement. He also held a firearms Licence for several years, but no longer works in that side of security. He also has a Certificate II in Security (Guarding) in 2002. He obtained a Certificate IV Martial Arts Instructor.

Ken began his martial arts journey late 1970 early 1971 after watching an impromptu demo at a popular nightspot given by Bob Jones and some of his students. Ken joined Bob Jones Karate Schools (Later to become Zen Do Kai) the next week at Camp Hill, also trained at South Brisbane, before transferring to Honbu in Adelaide Street, City in May 1974. The following instructors all helped shape his martial arts life and journey:-

Bob Jones, Steve Walters, Nich Pappas, Dave Berry, Billy Marine, Roman Neubacher, Steve Fyfield, George Romedulitis, Dean Watt, Peter Law and his instructor for the past 30 years, Malcolm Anderson. All of these instructors imparted valuable knowledge. He taught his first class at Indooroopilly Dojo as a Blue Belt. Over the years Ken has taught a lot of people throughout his career and now teaches at a small Dojo in Brisbane’s western suburbs -“Just enough students” he says.

During the mid 90’s Ken conducted self defence classes for women and children for a while as a community service after a spate of assaults on women in the western suburbs – all at no cost.

From Zen Do Kai the Bushi Kai System was devised by Mr. Anderson, and as Ken was a foundation member and only one of two originals left from the initial intake of students from 1970 – 71 (the other being Mr. James Reid). He, along with James were promoted to 7th Degree on 2nd June, 2002, some 14 years since their last elevation. In June 2005 Ken was awarded Hanchi Title. Ken has the utmost respect for all martial artists irrespective of what system they study.
Ken says ‘an individual chooses his own path to walk, respect him for that’.