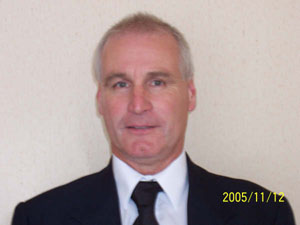 Inducted into the A.M.A.H.O.F.(Inc) for 2006
Instructor of the Year – Okinawan Karatedo (New Zealand)

Inducted into the W.K.U.H.O.F. for 2006
Instructor of the Year – Okinawan Karatedo (New Zealand)

Kenneth (Ken) Buckley was born in Manchester, England, in December 1947. He was educated at St. Peter’s primary and junior school in Wythenshawe, Manchester, and at St Bede’s College, Whalley Range, Manchester. He is an Electronics Technician by trade and has spent most of his working life either as a Service Manager or Self Employed.

Ken has been married for 37 years to a lovely lady named Helen and has two natural sons and one adopted. The youngest and oldest sons are Shodans in Karate, whilst the middle son is a Brown Belt.

His other interests include Football ( the real one with the round ball) , which he played for many years. He was Manager and/or coach and/or captain, plus committee member and publicity officer of the Putaruru Rangers AFC for many years. He also coached junior teams for many years. He states that he has received many more injuries from this game than from Karate, and more serious one, too. He is also interested in fishing, cycling and kayaking.

He came to New Zealand in March 1975, settled in the South Waikato and love it. He truly felt that he had ‘come home’ when he arrive back in NZ after visiting the family in the UK.

Ken first started training in Judo when he was eight years old. His older brother was training at the local Dojo and needed a training partner, that is, someone to throw around when he was not at the Dojo. Ken joined his first Martial Arts club in January 1958, although in truth he didn’t exactly join a club, he enrolled in a night school class that was a club.

After he could not get to the club any more he trained informally with two friends who were in the same boat as he was. One had trained in Jujitsu and the other in Karate and both could not get from work to home to club in time to train any more. (Public transport was good but rush hours had you waiting for an hour to hour and half to get on a bus to get home). This was his first encounter with Karate and he was early in his 15th year of age. They trained together until he met his wife and it became serious. His formal Martial Arts training ceased for about 5 years, although he still trained by himself.

He joined the ‘Shotokan Karate Centres’’ Stretford Dojo in January 1972. The Chief Instructor was a Sandan by the name of Jack Tilley, whilst the Dojo instructor was a Shodan, name of Fred Chadd. Training was very hard, especially on the Thursday nights when Jack Tilley took the class. He graded to 5th Kyu purple belt with them before he left to come to New Zealand. Ken looked around for Shotokan Karate but could not find it, so he trained and taught at the Budokan in Tokoroa until he found a JKA Nidan, name of Gary Swann, who had just converted the Budokan clubs in Rotorua and Tauranga into JKA clubs, so he then went to both of these clubs to train. The Rotorua club was run by Gary and Tauranga by Len Hooker.

Ken had only trained there a few weeks when Gary promoted him to 3rd Kyu purple belt and suggested that he open a club in Putaruru. This he did but alas Gary was never to see it as he returned to his native Canada with his ‘wife to be’, on holiday. She met someone else whilst she was there and left him. Gary returned to NZ to sell his Pizza restaurant, then went back to Canada to win her back, failed and committed suicide. Ken was left with a fledgling club and no help, as the Rotorua club closed as soon as Gary left NZ, and Tauranga shortly afterwards. He ran the Putaruru club for 5 years by himself, with the exception of a period of 10 months or so when he had the assistance of a Nidan in Shotokan, name of Sean Patrick ‘Red’ Loghan. During this time he took a grading and was promoted to 1st Kyu Brown belt in 1977. This was his hardest grading ever, as for three and a half hours he was on the floor on his own. Very tough mentally. Red had to leave the area as he was unable to find work there, so, after 5 years with only two gradings being held for the club and having no access to anybody who was qualified to conduct gradings, Ken closed the club in 1980. He continued to train and teach on an informal basis however.

In January 1986 Ken joined the Okinawan Karate-Do (New Zealand) in Hamilton and travelled there with his eldest son twice a week for training. By the end of that year he was taking his son and two of his former Shotokan club students through to Hamilton for training, and in 1987 he was requested by these and some other former students to establish a club in Putaruru. Ken approached the then Chief instructor Sensei Richard Leong for his permission, and the Putaruru Dojo of Okinawan Karate-Do (New Zealand) opened on September 15th of that year.

The Okinawan Karate-Do (New Zealand) was started in the early to mid 1970s in Hamilton by Sensei Gary O’Conner. Gary held a dan grade in Shotokan karate and was introduced to Okinawan karate by Mr Laurie Olliver. In 1977 Richard Leong joined the club as a senior grade. Richard had trained in Shotokan karate and had taught at the Auckland University club since 1974. Richard also had early training with Leong Fu Academy of Martial Arts in Malaysia since 1965.

In 1978 Gary O’Conner returned to Australia and seconded the club to Richard Leong. Richard took a Black Belt grading with Mr L Olliver and Mr J Bailey in 1979.
Ken was promoted to Shodan in November 1977 in a grading held in Hamilton. At that time OKDNZ had a 5 dan system.

He organised and ran the 4th Annual OKDNZ tournament in Putaruru on Queen’s Birthday weekend in 1990. The tournament had over 100 entries in 14 divisions and out of town and local competitors, their family and friends, were treated to a free dinner, disco and drinks that evening.

He requested of Sensei Richard that he be allowed to revise the Kyu grading syllabus and was granted permission to do so. After a lot of work by both himself and Chris Massey, he gained approval from Richard for the new syllabus, which took the number of Kyu grades from 5 to 7.

Ken found that there were many people within the Martial Arts system who did not understand the 5 Dan system and inquiring new students often said that they could get to 10th Dan in other systems, but only to 5th Dan in theirs, even though they all knew that most of them would not make Brown belt. Explanations that Master Funakoshi Gichin, who introduced the grading system into Karate from Judo, was himself a 5th Dan when he died, and how can you be higher graded than the person who founded the system, did not do any good, so, after much deliberation, investigation, conversation, hard work and soul searching, we changed to a 10 Dan system in November 2003. Chris Massey and myself took a grading with our Technical Adviser to re-grade ourselves within the 10 Dan system and we gained an interim grade to 5th Dan. He is awaiting a re-positioning grade within the 10 Dan system from the NZ Sokeship Council.

He both learned from and taught people at the ‘Masters’ Seminar’ the day after the 2002 Martial Arts Hall of Fame in Taupo, NZ.

He has been published, writing an article about himself and his organisation for the NZ publication ‘Insights Into Martial Arts’, one of the best, but now sadly no longer published, Martial Arts magazines I have ever read.

He and his system do not concern themselves with sport and tournaments. Instead they deal with self defence and respect for self and others. His three rules for techniques are inherited from Sensei Jack Tilley and are:

They try, to the best of their ability, to train in a way that people are not damaged by ‘dangerous’ exercises and too many repetitions of some exercises as they used to in the 1970s and 80s.

Since the formation of the Putaruru Dojo 18 years ago they have had 11 students attain their Black Belts, excluding Ken. Two went on to attain their Nidan and one to Sandan, then to Godan when they changed to a 10 dan system. In November 2005 another student, who graded to Shodan under Sensei Richard, gained his Nidan. Another of ken’s ex-students has just returned to training with Shotokan Karate in the UK, where he now lives, and attained his Brown belt at his first grading after a 12 year lay off. Ken was at his grading and believes that he would have gone to Shodan, if he had been training with them for more than 6 months and the right people had been present.

Ken has conducted many self defence courses over the years, for the YMCA, South Waikato Education Centre, St John Ambulance, women’s groups and a number of private groups, including the aged, and he must say that they have always received very positive feedback, both via the local community and on the course evaluation forms. He believes that self defence has to work on the KISS (Keep it simple, stupid) principle for it to be of any use, no time for flowery ‘show off’ moves when your life could be on the line, simple and effective.