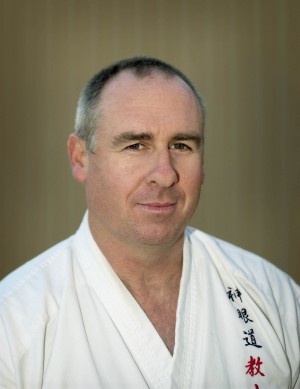 Inducted into the A.M.A.H.O.F.(Inc) for 2006
Instructor of the Year – Shingen Karate

Inducted into the W.K.U.H.O.F. for 2006
Instructor of the Year – Shingen Karate

Kyoshi Geordie Thompson was born in Christchurch, New Zealand in 1961 and started training in Judo at the age of eight. At the age of twelve he started training in Kyokushinkai Karate under Shihan Renzie Hanham and stayed with him when the Dojo moved to join the World Seido Juku organisation under Kaicho Tadashi Nakamura in 1976.

Geordie attained his Shodan in Karate in 1984 and Nidan in 1986 when he also competed in the New Zealand Seido karate championships coming first in Kata and Sparring in the black belt division.

Geordie moved to Western Australia in 1988 where he trained under Shihan Mervyn Nelis and returned to New Zealand briefly in 1989 for his Sandan grading. Knowledge of Kendo was a requirement of the third Dan syllabus and through seeking an instructor for this art Geordie started training at the Budokan Academy under Kyoshi Ramon Lawrence. Iaido and Jodo are also taught at the Budokan Academy and Geordie took up these arts in 1994 progressing to Shodan in Iaido in 1996, Nidan in Iaido in 1998 and Shodan in Jodo in 1998 whilst training in Japan under Nagayama Sensei.

Geordie was promoted to Yondan Renshi in Karate by Shihan Mervyn Nelis in 1996 and Nidan in Jodo by Sensei Nagayama in 1999.

In 1999 Geordie decided to move away from the World Seido Organisation and formed the Shingen Academy of Martial Arts. Shingen Means ‘Compassionate View’. The move was very amicable and Geordie often trains in his original Dojo in New Zealand when he returns to be with family and friends. In 2000 he was awarded the rank of 5th Dan in Karate by the Australasian Martial Arts Hall of Fame Sokeship Council.

A keen competitor, Geordie has competed in many state and national tournaments in both Iaido and Jodo winning both the national Iaido individual championships and Jodo pairs championships in 2003.

He believes that Martial Arts provides a useful platform for self development and personal growth by providing life changing challenges to students throughout their progress. He tries to ensure that the students enjoy their training and uses the information gained through training in a variety of arts to create a unique learning experience. Geordie is a senior manager in local government and specialises in recreation planning, group facilitation and neuro linguistic programming. He believes that Martial Arts is about developing strong relationships both with yourself and others with the ultimate goal being Martial Artistry.