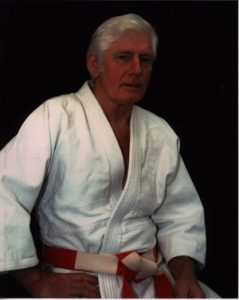 Professor Gary Trail was born in Whangarei on the 27th December 1945. He began school at Hukerenui, a rural area about 25 kms north of Whangarei, and was brought up in the North living on dairy farms until his parents decided to move into Auckland in June 1958 when he was 12 years of age.

He finished schooling in Auckland and yearning for the country life again, went back to work on dairy farms in the beautiful Waikato and Bay of Plenty districts, which belong to some of -the most productive farming areas in New Zealand.

The more popular sport then among the youth of the farming communities was rugby, so he played this for a while but soon discovered it was not to be his sporting forte. Gary returned to Auckland in 1963 having shaken the “country bug” and began work in the building industry. Still in need of some type of recreational outlet other than rugby, he eventually decided to give the grappling art of judo a try. It was becoming popular throughout the country at the time as were other types of martial arts, due to experts arriving from overseas and New Zealanders themselves who had earned their credentials in other countries.

So in June of 1966 at the age of 20 he began judo at the N.Z. Judo College in Central Auckland. His first instructor was Henk Broewer then a 1st Dan in judo and jiu-jitsu, and at the time newly arrived from Holland, having taken up his teaching position under the guidance of Hans van Ess who was the founder of the N.Z. Judo College. Henk was also an expert in karate-jutsu which demonstrated mostly atemi-waza or striking techniques, who eventually went on to “greener pastures” and Gary completed twelve months of judo training under the tutorage of van Ess Sensei who was at the time 2nd Dan in judo and 3rd Dan in jiu-jitsu.

Gary crossed over to jiu-jitsu and as he progressed he became all the more intrigued with it’s style that he learnt had been devised and taught in Europe before and after the Second World War by Mikonosuke Kawaishi, a man whom he now holds in the highest esteem as a martial art genius.

The previous twelve months spent learning Kawaishi ‘s method of judo came in good stead for the similar grappling techniques in his method of jiu-jitsu. At the time, around 50% of Kawaishi’s judo method was included within his Goshin Jutsu or Judo Self-Defence, as some did label it in Europe. Some renovations and liberties with the syllabus do take place of course, and today there is no less than 75% of his judo method officially included in the New Zealand system.

The more Gary learnt, the more he realised the many components which made up the system, such as knife-defence, keri-waza (kicking techniques), attack-actions, counters against judo exponents, etc., as well as the old Jiu Jitsu techniques which would never lose their usefulness. The first syllabus is composed of many basic releases from holds, strangles etc., of which came from a branch of kung-fu which specialised in such. Even the basics in Queensbury Rules boxing is taught in order to help the jiu-jitsu exponent to understand and utilize

such movements to their advantage. Perhaps the most intriguing of all is the atemi-waza or striking techniques. These are taught throughout the syllabii with a set syllabus halfway through the kyu grades and another in the Shodan syllabus itself. The atemi-waza was devised along the lines of the ancient Chinese art of dim-mak where the blocking techniques couple as the initial set-up points to drain energy before the main strike is delivered to a vital point. However, apart from this Gary prefers not to say any more as there are many other things within the syllabus of which he shies away from talking in general conversation. Gary learnt long ago that the best self-defence technique was the element of surprise, while at the same time to use only the right amount of force necessary to control the opponent, a principle practised and taught by the jiu-jutsu Great, and founder of Aikido, Morihei Ueshiba.

Gary achieved the Shodan in March 1971 that allowed him to officially teach as Sempai under Van Ess Sensei’s durisdiction. Of course teaching the art was another learning curve, all the while improving upon his own expertise that hinged greatly upon the finer detail of the techniques. This put him in good stead for achieving Nidan almost three years later in December 1973. In the meantime he had reluctantly taken over as Chairman of the New Zealand Jiu Jitsu Association Inc (founded in November 1968 by Hans van Ess, Victor Sargent of Budokan Karate NZ and Laurie Olliver), that was at it’s lowest ebb due to inactivity and was about to go into recess.

Gary became the Associations third Chairman in 1972 and with the valued support of others, which included Ivan Gale (Pukekohe Jiu Jutsu Club), Steven Heremaia (Rongo School of Jiu Jutsu in Central Auckland), and later Van Ess Sensei, upon his return from Europe as a Yondan, the NZJJA gained in strength to correctly administer it’s policies. The tournament scene eventually became incorporated with an annual camp that became the major drawcard to bring Association clubs together. For the tournaments to remain successful a Referee’s and Judge’s course (instigated by Van Ess Sensei) was necessary to ensure that a high standard be kept. Later, an Instructor’s Course had to be devised when in 1981 the Government backed Martial Arts Council was inaugurated and ratification of the credentials of all martial arts instructors in NZ was undertaken. Gary still has his Instructors Registratyion Certificate hanging on his wall. This was presented by the MAC upon completion of their ratification of his credentials, but he did wonder a little at the time not knowing what to expect and he learned that there were a few who did not pass the scrutineers standards. The work of bringing the many different martial arts societies and their clubs together under the ‘umbrella’ of one controlling body was later continued by the NZ Assembly for Sports which was formed by the NZ Government in 1987. Unfortunately they offered ‘carrots’ but nothing much came of it – as far as jiu jutsu went anyway – and the Association cancelled it’s membership after a few years.

As the years passed, Gary continued to teach and train to eventually achieve Rokudan in 1993. By that stage he had long relinquished his position as Chairman of the Association having spent eleven years in that role. He stayed on as a committee member of the Black Belt Technical Council that is composed of a panel whose task was to supervise all Dan Gradings and any technical matter relating to the syllabus. Later, he took over Han’s position as Chairman of the BBTC when he retired in 1995.

But Gary’s heart was not in it and he allowed himself to fade from the scene in late 1997 as he wanted to concentrate on certain personal projects that had their beginnings some years before. These projects had become a priority to complete, not the least of these being the furthering of a Society he had created to cater for the needs of future clubs in the Far North -where he now resided. Over the years he had steadily but surely moved further away from the maddening crowd’s to finally settle in the seaside resort of Pukenui near the top end of the country (end of the world it felt like to begin with) in May 1986.

One of Gary’s greatest achievements has been the building of his home gym/dojo which was completed in 1995. Not long after its opening, Grant Power, 4th Dan Instructor of the Whangarei based karate club of Go-Ju Kensha Karate N.Z. got in touch as he and a small group of students were willing to travel up once a month to begin training in jiu-jitsu. Grant had been a valued pupil during the early ’80’s when he attended classes at Gary’s southern Whangarei based club. He was then a practising karateka, achieving his Shodan at the time, and it was mainly through his friendship and that of another excellent karateka, Henare Heta, that a great mistrust of karateka’s which had developed in Auckland between myself and ultra-aggressive karate factions, was finally allayed.

The karateka’s revelled in the grappling sessions and readily adapted to the jiu-jitsu attack-and-defence techniques, many of which mirrored -their own kata movements. It was the atemi-waza that mainly demonstrated for them the practical applications of the kata’s – the bunkai, as they were known. Their visits coincided with his jiu-jitsu class as it was then, which he took on a fortnightly basis, due also to the distance travelled, some coming from as far as Kaikohe 100 kilometres away. The fortnightly Saturday classes, although arduous due to the hours spent on the mat, were a “breeze” compared to the tedious nature of regular night classes through the week, which had been the norm for many years. However, this has again changed due to demand. The night classes started up again in 2003, and a women’s short-course self-defence syllabus had to be devised with the first class commencing in late 2005. No rest for the wicked, as they say.

Gary still endeavours to keep fit and conditioned, as far as his age will allow, to the arduous practices that make up his training regimen by working out on light weights and practice sessions on days when he is not teaching. It is a pleasure to simply walk out from his back door and into the Dojo to spend this time “quietly” by himself. Gary confesses that after all this time, he is still learning. Perhaps there is too much in their system the way they have made it today, who knows, but he does know that if it had not been for the extent of the syllabus with its many and varied techniques and different syllabii on diverse subjects, he could well have lost interest years ago.

Gary feels that Kawaishi’s method of jiu-jitsu will keep him going for a long time yet in his endeavour to master what he can. So he hopes he has the time to do just that.

Tickets for the 2020 Presentation Dinner and associated events are now available.
BUY TICKETS