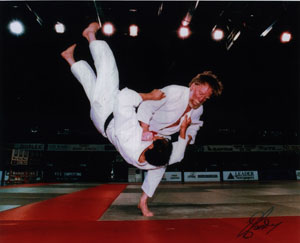 Sensei Frank Dando was born on 8th July 1930. In late 1956 Frank arrived in Tokyo, Japan, as a Ikkyu (Brown Belt) . He won his Shodan by defeating six brown belts in a monthly contest. After receiving his Shodan he was selected for the Kodokan Kenshusei (the Kodokan Special Research Group) under sensei’s Daigo and Kawamura. In October 1957 he had won nine points in monthly contests and was awarded his Nidan. He was then 27 years of age and had practised during the year six days a week, four hours per day, and had completed winter and summer practise.

During this time he practised regular at the dojo of Shinojima Yoshiaki (9th Dan) in Utenji and generally trained directly under his supervision.

Frank again went back to Tokyo in January 1970 at the age of 40. He was again enrolled in the Kenshusei. He fought in monthly contests and was awarded Sandan. During this period he trained two hours per day and six times a week at the Kodokan and for half of the year he trained for two hours each day ay the Utenji dojo with Tony Orton (the English International player) in goshin jitsu, katama-no-kata and nage-no-kata. Shinojima Sensei felt their nage-no-kata was of such a good standard he nominated them to perform it at the opening ceremony for the yearly Meguro-ku championships of that year. Each received a certificate to this effect from the organising committee.

In 1975 at age 44 he returned again to Japan and trained again under Shinojima Sensei’s supervision and submitted himself to an examination for Yondan. He was required to demonstrate nage-no-kata and katame-no-kata and be examined by randori shiai against Yondans randomly selected from the floor of the main dojo. He threw the selected player and was passed by the grading commission under Sensei’s Kotari, Abe and Osawa.

It was a problem for the Kodokan Grading Commission to find practising Yondan players of Frank Dando’s age and their eventual choice for his randori shiai was a young University player. This grading, as all his other gradings, was most exacting. Shinojima Sensei noted that he was an effective player in Japan in 1982 when he was over 50 years old. He saw him in Australia in 1992 at age 62 years and considered him still fit and effective. Frank is regarded by Shinojima Sensei and other senior Kodokan Instructors as a judoka.

Frank did much of his fighting in Japan and the considerable amount he did in Australia was outside the Olympic body – unfortunately Judo was not immune from the divisions that seem to plague the martial arts and has unified only in the last ten years. A sign of this unification is the presence of Frank on the Olympic body that supervises all Australian Judo Black Belt gradings – the Judo Federation of Australia National Grades Commission.

One of the years he spent in Japan was on a Monash University scholarship. He studied Japanese language and sociology for an Honours degree. His later Masters Degree was largely prompted by the judo experiences he wrote in an article for an educational magazine.

Frank now runs a school which devotes much of it’s syllabus to martial arts and an article on this was recently published in the Blitz magazine.