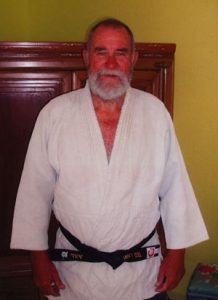 Bill Broadhead’s judo career commenced 45 years ago during which he achieved success across all aspects of judo life. This included competition and coaching (at both State and National levels from 1966 to 1977), in club and Black-Belt Register administration, and as a developer of Judo talent and a mentor and friend to those who choose to ‘carry the torch’ for the sustenance and development of judo, to the highest levels, in Australia.

Bill commenced his judo career in 1960, at the age of 24, under the guidance of Guy Pujot at the Judokan club at Glenhuntley, Victoria. In 1962 Guy retired and passed on the mantle of running the club to Bill, a 2nd Kyu with the support of Sempei Otto Kruger, and now based in Sandringham, the Judokan club quickly became a force in Victorian judo winning the Victorian State Teams competition in 1963.

During 1963 Bill moved to Moss Vale, NSW, and established the International Judo Club, which he ran for 16 years. During these “golden” years of judo at Moss Vale, Bill’s individual tournament, representative and coaching record highlights include six (6) gold medal and four (4) silver medal results at National titles, representation at five (5) Oceania championships and a place on four (4) World championship touring teams, both as a player and a coach.

Bill’s career of individual success was fortified by the success of those he coached, many of which became State and National champions. Some of Bill’s proudest judo moments include the ongoing success of the International Judo Club and the competition success of his kohei’s, including coaching Olympians Doug Churchill and Rob Moffit, and competing in the 1977 Oceania championships with his two sons Alan (representing the NSW team) and Rod (representing the National Young Men’s team).

Bill’s leadership style of train hard, compete hard, and play hard, inspired many students to be apart of the Moss Vale International program, with weekly training sessions drawing judoka from afar, including Sydney, Canberra and Illawarra regions. Bill also established Judo programs as a school sport at Tudor House (Moss Vale) and Chevalier College (Bowral) where he taught PE, Asian Social Studies and Australian History with that program also seeding National champions. In the constant pursuit of technique excellence and the improvement of competition performance, in 1971 Bill hosted Toshio Fukui (the 1970 Kunsai area champion) to live in Moss Vale, train at his club and provide the opportunity for any judoka who wished to develop excellence in technique, particularly Newaza.

Furthermore, under Bill’s direction the influence of the Moss Vale International Judo Club spread well beyond his local club, spawning International clubs at Wollongong, and moving on to the far south coast of NSW. He formed with his kohei’s Chris Franks and Graeme Wilson, judo clubs at Bermagui, Bega and Cobargo. From 1981 to 1985, the annual Cobargo Judo Camp drew participants from all over NSW, Queensland and Victoria to train and learn from the array of champions that attended each year.

Bill served an the Board of the Black-Belt Register for ten (10) years under the leadership of Jim Robinson. During this time Bill served as Vice President, was on the grading panel, and also served on the NSW JFA Board of Management. When Jim died Bill was voted into his role of Patron of the Black Belt Register, and Life Member.

Always willing to help establish Judo in other regions, Bill was sent to Darwin by the JFA to help them establish statehood to enable them to compete in the National titles. Bill was twice invited back to coach and served as Tournament Director to run the Territory’s  inaugural Open Championship. Bill has always been a supporter of regional development of judo and in 1992 was invited by his fellow National Team member and great mate John Whipp to go on a coaching tour across North Queensland at Townsville, Malaney, Caldwell, and Mt Isa, organised by John Whipp.

The legacy of Bill Broadhead in Judo is firmly entrenched in the areas that he invested himself, and particularly through the ongoing success and the growth of the International Judo Club in Wollongong under the guidance of his son Alan.

In April 1982 Bill gained Godan, (5th Dan) and although retired from the day-to-day routine of judo life, Bill has maintained an involvement through occasional coaching support at IlIawarra International Judo Club, and maintains an interest in the development of the sport of judo in Australia.

In his early years Bill worked as a Gentleman’s Hairdresser and ran his own Hairdresser Sports Store in Moss Vale. Later he accepted a teaching position at Chevalier College. He taught for eleven years completing his training through Summer School and by correspondence with North Sydney Catholic Teachers College.

Moving to the Bega Valley he developed an innovative program with people with a disability, setting up the first fully diverse Work Crew at Tulgeen Group Bega. He was instrumental in the development of a farm to assist Schedule five clients, from Strathallen to enter the wider community. This was in keeping with the Richmond report. On retirement he grew flowers commercially, selling to florists on the South Coast.

He was a member of the steering committee that set up the Sapphire Coast Producers Association, and is the Patron and Life Member of this organisation. Through SCPA he helped set up the Australian Native Flower Growers special interest group, which has successfully exported product to Japan, Asia, Europe and America. Bill now enjoys his garden and fishing. He still plays a role with SCPA and is a Director of the South East Region Training and Education Centre, both non profit organisations aimed at helping the community.