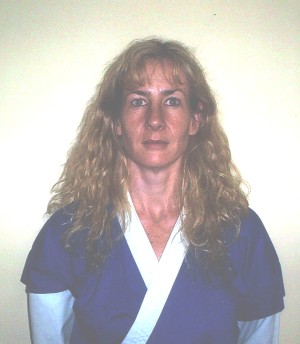 Renshi Angela Phillips began training with San Chi Kai Karate in September 1978, in Rosebery, Tasmania. Although she was only 11 years old she enjoyed the discipline and challenges faced in a male dominated sport, this inspired her to become more determined to succeed in Martial Arts.

It wasn’t long before Angela found her forte was in kata and in 1980 began entering local and state tournaments at junior level, gaining many first placing’s. From 1981- 1988 she represented Tasmania in interstate teams tournaments as the kata representative, her specialty being the double nunchuku.

It was through her love of kata, both open hand and weapons, that she began demonstrating kata’s statewide, promoting women in Martial Arts as well as demonstrating Self Defence techniques, which in turn led to security work for major Tasmanian events.

Angela became one of a few females to attain 2nd degree Black Belt at junior level. After turning 18 she worked her way back through the senior ranks to become only the second female in San Chi Kai to receive 4th degree Black Belt.

After the birth of her first child in 1988 Angela stepped back from the tournament scene and began to focus on coaching other students entering tournaments, taking a team of students to the world cup in 1998, many of whom were successful, including a silver medallist.

Angela found instructing other people to attain their goals, and watching them go through the ranks to black belt, was very satisfying, so in 1995 took over the Devonport club. By 1998 she had opened up three other clubs along the North West Coast of Tasmania, including two rural areas for women and youth unable to attend metropolitan areas due to travelling restrictions.

In 1998 she took over as the State Head Instructor overseeing all Tasmanian clubs, organising camps and seminars that members of the style came from all over Australia to attend.

Being a female instructor, Angela encourages and mentors other women to train alongside men. This was a priority as all genders can achieve success with diligent training and discipline, so Angela and her mother, also a Martial Artist decided to run self defence courses for women. Word of mouth soon had them teaching self defence as electives in high schools and colleges along the North West Coast of Tasmania.

Angela has also trained in Lama Kung Fu, Unarmed Combat, and has had the opportunity to train with and learn valuable information from many Martial Artists some of whom include Benny “the Jet” Urquidez & Dan Isanto.

Angela still enjoys passing her knowledge onto others especially self defence awareness to other women. She encourages her two daughters to strive for success, both of whom train with San Chi Kai and have attained mascot & junior green belts.

Currently employed with Coles-Myer on a rotating roster she has had to take a back step in full time teaching, but still oversees the clubs and trains regularly with the instructors at Devonport which now has the luxury of many qualified black belt Instructors.

She lives with her partner and two teenage daughters in a rural town where she is in the process of opening up a new club.