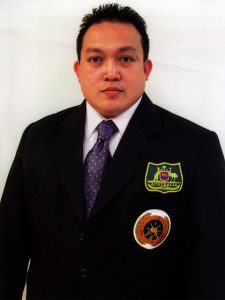 Inducted into the W.K.U.H.O.F. for 2005
Instructor of the Year – Isshinryu (Australia)

Bal Catolico was born on 10th October, 1970. At the age of 8 years Bal began to study the Filipino Martial Arts “Arnis” Stick fighting under the guidance or instruction of Mr Rudolfo Fulgar, Filipino Stick Fighting Instructor(Naraphil) National Arnis Association of the Phillipines, at the Rizal Memorial Sports Complex Manila, Philippines. From Stick Fighting his interest in Karate grew bigger and bigger! He joined the local karate school in his area and later studied Tae Kwon Do for a few years.

Bal’s education culminated in achieving his Bachelor of Science Degree in Aeronautical Engineering at Patts College of Aeronautics. He is currently employed as the Operations Manager of a Security firm.
In the early or mid 80’s he joined the Academy of Full contact Karate under Master Bernard Elorta and Master Jesus Umbac who at time was the Chief Representative for So Bak Do,Kyokushin, and IAMA. He furthered his studies in Combat Isshinryu Karate and Weaponry under Grandmaster Gary Alexander and in 1993-94 he became the Chief Representative of IAMA in Australasia. Bal was promoted to the rank of Roku Dan – 6th Degree Black Belt on 7th April, 2002.

Every year he organised a martial arts world tour, with himself, his students and martial artist from other disciplines travelling around the world, for two months to gain more knowledge mid compete internationally. Every year they participate at Gary Alexander’s International Association of Martial Arts Championship in New Jersey, USA, the longest running event in the western hemisphere if not the world, from there they travelled around Europe and Asia.

His martial arts positions have included: