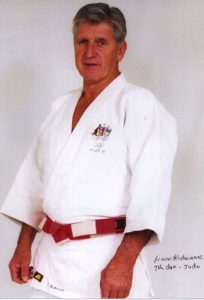 Trevor Kschammer – 7th Dan (International Judo Federation) is from Adelaide, South Australia. He has been married for 36 years to Heather and has two children – Tanya (married 2 children) and Damien (married 2 children). His family has been strongly involved in Judo at State and National Level. Trevor also is a life member of JFA (SA) Inc.

His first involvement in Judo was at the age of 12 years. It wasn’t until he watched his brother Mick obtain his black belt that his interest became stronger towards the sport.

He started competing for South Australia in 1966 and continued until 1983. He then took up coaching at State and National level. His coaching career expands from 1983 – 2000 with the able body and highlights from these events were World Championships, Commonwealth Games as Senior Coach and Atlanta Olympics as Head Coach.

His position now is Head Coach of Judo for the Australian Paralympic Committee being since 1993. During this period he has coached at International events as well as the Paralympics in Atlanta, Sydney and now is working towards Athens 2004.

When not away with Judo, he is the Owner/Operator of a well establish Glazing business. He also enjoys playing his guitar (country music) and a round of golf. He also enjoys time out at his River Murray holiday house with many hours spent with family and friends.

He has many friends throughout Australia and overseas who have followed and supported his long journey of Judo over many years.

Some of the many positions as Head Coach/Technical Staff of Australian Judo Teams: