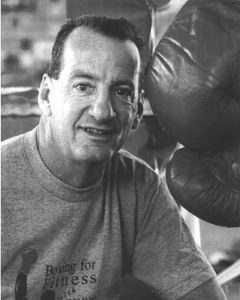 Inducted into the A.M.A.H.O.F.(Inc) for 2004
LIFETIME ACHIEVEMENT AWARD BOXING

Inducted into the W.K.U.H.O.F. for 2004
LIFETIME ACHIEVEMENT AWARD BOXING

Tommy, as he is affectionately known by all, was born on the 9th of May 1948 in Melbourne, Victoria. He is the eldest of 5 children. At the age of 12 he first discovered boxing by way of a demonstration in a church hall. It attracted him as he saw it as the answer to his problems, which largely consisted of being bullied at school and home. He was a diminutive boy who had low self-esteem.

He first trained at Billy Murphy’s backyard boxing gym in Carlton for 2 or 3 years. He went to Sydney in 1967 as a confused 18 year old who was yet to find his place in the world. He found his way to another backyard boxing gym, run by a man named Johnny Mansell, who became one of the great mentor’s in his life. Under Johnny he had his first crack at amateur boxing. The need for money motivated Tommy to turn professional in 1968. He fought in the clubs of Sydney and also fought in Melbourne. Never a champion, just a stumbling block, a fighter if you beat you could go somewhere if you didn’t you wouldn’t. He had a passion for boxing with the discipline, respect, mateship and physical strength he gained from it Tommy became a confident young bloke.

In 1975 he arrived in Perth Western Australia and sought out a boxing gym to train in. He found a Police and Citizens Youth Club in Maddington. It was operating in a condemned building and although boxing was on offer, the club had no coach. A small group of eager boys and a copper greeted him on his first visit. Tommy wasn’t partial to the law and decided not to return. The Police constable discovered where he was staying and repeatedly implored him to teach the kids. Reluctantly he agreed to a 2-month stint prior to heading north for work.

In 1981 he became State Coach for the first time for the West Australian Boxing Association, travelling interstate with the team.

1982 he obtained his level 1 coaching accreditation and trained his first 2 National Champions.

In 1991 the West Australian Sports Federation nominated him for Coach of the year.

In 1993 he was the first ever West Australian boxing coach to obtain level 2 accreditation.

In 1994 he travelled to the Oceania Games as assistant National Coach.

In 1996 he coached the Asian Pacific – Australian Cruiserweight Champion who was ranked number 6 by the World Boxing Association. He also coached professional fighter David Letizia. A boy who first came to Tommy when he was 15 years old and today remains a close and trusted friend.

From 1996 He completed his first marathon.

Tommy has never focused on champions; in fact he has lost count of the number of State Title – Golden Gloves Champions he has trained. His boxing gym was always open to all. He never deemed one boy to be more worthy of his time than another. He considers it a real privilege and triumph to have trained a profoundly deaf boy to be Australian Champion and to have training alongside him a boy who was totally blind from birth.
His ambition has always been to help others to help themselves. He has true empathy for the disheartened. Those whom lack self-esteem – confidence find a place of belonging under Tommy’s tutelage.

Boxing brought order – discipline into his own life, giving him self worth, Tommy is thrilled when he sees others become empowered to make positive changes in their lives. Always sharing his unique wisdom by equally unique means has endeared Tommy to many. He is proud to have been made a Paul Harris Fellow by Rotary, although he is a not a Rotarian and a Life Member of the West Australian Police – Citizens Youth Clubs.

Tommy has never asked more of anyone than he himself would be prepared to do. In 1998 Tommy was truly tested, he underwent quadruple bypass surgery on his heart. Setting goals and overcoming obstacles is what Tommy has always taught others to do. At this time he must do it for himself.
He set his goal, to run another marathon; his initial training session was just 48 hours post operative. He shuffled along the 100m-heart ward corridor at Royal Perth Hospital 30 times, 3km, that first day. He achieved his goal 1 year and 2 weeks later by running the Perth Marathon in 3hrs 59mins and 26 seconds.

He was back at the boxing gym just 3 weeks later, again training his boys.

In 1999 Tommy took his first vacation! Shortly after his return, he met Sharni, who is today his wife. Between them they have 5 children and an increasing number of adored grandchildren! They are passionate about service to others and travel.

In 2000 Tommy began reaching a wider audience through his inspirational speaking. He is an Accredited Speaking Professional with the National Speaker’s Association of Australia. Something he refers to as â€˜Not bad for a kid who used to stutter until he found boxing.

In 2002 Tommy opened his own Private Boxing Gym in Victoria Park. Where he continues to train young boxers and inspire all manner of athletes to achieve their dreams.

He often greets people by saying “Welcome To My Dream”