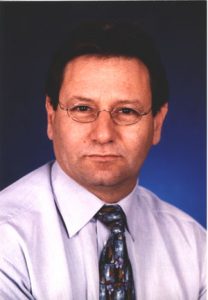 Inducted into the W.K.U.H.O.F. for 2004
INSTRUCTOR OF THE YEAR  SAVATE

Roland Armarego was born in Perth Western Australia. In 1985 he graduated form the Western Australian institute of Technology (C’urtin University) with a Bachelor Degree in Environmental Health. Since that time Roland has predominantly worked in his own consultancy business specialising in failure analysis and process risk identification and analysis. Roland works Nationally and Internationally and is regarded as the leading specialist in his field. Currently he consults to both industrial and healthcare organisations.

Roland Armarego commenced training in martial arts under the tutelage of Terence Bridgeman in 1974. The primary motivation for him was a desire to be involved in a form of physical activity that was beyond the traditional Australian sports of the time and was intellectually stimulating. Secondary was the attainment of defensive and combative skills.
1980 presented Roland with his first opportunity as an instructor in Savate. Since that time he has been actively involved in tutoring Savate and Savate based women’s self-defence classes. With his colleagues he has represented Bridgeman Savate both within Australia and Internationally
In 2000, with other collegues Roland formed the Bridgeman Savate Association, with the aim of widely promoting and developing the Bridgeman syllabus. In his capacity as an executive on the association committee Roland has assisted the group establish itself as an exclusive and elite group in this specialised field.
Career highlights include:

Since he commenced his Savate training Roland has witnessed, and been involved in, the progression and development of Bridgeman Savate as an integrated, multi-faceted system of recreational combat, with it’s rudimentary European origins, to a level where it represents an elite position in the Savate community.