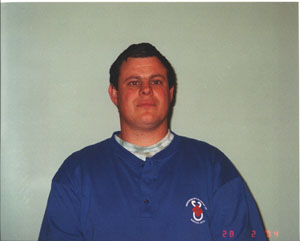 His first introduction to martial arts was Judo, which he started when he was six and continued until he was nine. He took up Nam Wah Pai Kung Fu in 1991 and after 2 years and several titles the Dunedin club was disbanded.

After this Lee started teaching his own eclectic system to some friends. This system was more concerned with teaching people a group of techniques they could use effectively, rather than the same techniques as everyone else. There was always a sense of realism as he was long dissatisfied with the emphasis put on tournament sparring as his faith in the strategies involved did not mesh with his own knowledge of fighting for real.

In 1993 , at age 22, Lee was at a local ‘Fight Night’ and one of the pre-fight demonstrations was performed by an Eskrimador and Lee was struck by how similar the techniques shown matched those he used and taught himself.

This was the start of a long friendship with both the art and the instructor as Lee began training in Cebuano Martial Arts (Cebu is the main island in the Philippines) under Daniel Brown. This new style was unlike any traditional classes in that training was informal with no bowing or kow-tau-ing, and the atmosphere was friendly and supportive with no player hating (bad mouthing other systems).
Lee studied judiciously and was helping take classes within six months and taking his own classes within another six.

While grading for his Black Belt under Grand Master Greg Henderson within three years of starting Eskrima, he realised that Eskrima was not just about ‘our’ martial art and in fact not just about ‘martial arts’ alone, and at this point started looking at other systems for a better understanding of martial arts in general. To this end he started going to seminars on all sorts of styles and systems. It was around this time that Lee met Rick Moneymaker a Ryu-Kyu and Pressure Point specialist at a seminar run by Ian Waite, and Lee realised that here was a tool that could make more complete the understanding he had of some traditional technique that he had found previously unwieldy.

In 1999 Lee started training in the Reiki (Usui Natural System of Healing) and by November of 2003 had attained Master / Teacher status.

Maestro Lee Mackie believes in repetition with understanding. Repetition by itself is nowhere near as useful as repetition with visualisation and interpretation. Training at a much reduced speed teaches just as much, if not more, than full speed as it allows the brain to become involved in the concepts being used rather than the individual techniques being applied. Through a thorough knowledge of body mechanics and body dynamics we become aware of motion in a holistic (whole body) way and even though technique teaches motion, understanding motion will teach unlimited techniques.