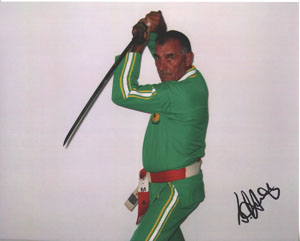 Inducted into the A.M.A.H.O.F.(Inc) for 2004
INSTRUCTOR OF THE YEAR – FREESTYLE KARATE

Inducted into the W.K.U.H.O.F. for 2004
INSTRUCTOR OF THE YEAR – FREESTYLE KARATE

Shihan John Hunt started Martial Arts in Tweed Heads with Nidan Brian Ellison in Kyokushinkai Karate in May 1974 at the age of 27. In 1979 he went to Sydney and completed his Black Belt grading at the YMCA under Godan John Taylor. After a six hour grading he passed and was so injured he couldn’t attend the ceremony afterwards because he could not walk.

After 1980 he started teaching and training, branching out on his own and started the THKPO Karate club which he ran for 5 years and formed 6 clubs around the Gold Coast. Not getting any higher gradings through his own club, it was decided to join the clubs together.

In 1985 he joined Zen Do Kai under Malcolm Anderson and followed the way of the bushido. Having trained extensively in weaponry he started to teach through Billy Bowman and many of the Zen- Do- Kai high ranks. He taught the Staff, Bo, Katana, Nanchucku (both single and double) and the Twin and Sai swords. He also mastered many other weapons. At this time Zen- Do- Kai had branched out into kickboxing. This was more to his liking, so he started teaching, training and competing in local and interstate tournaments.

In 1990, to better his knowledge he visited Thailand and trained under Mr. Loo to perfect his techniques.

In 1991, when in Newcastle he trained with Russian World Karate Master Les Anyos and mastered the 4 stages of Chi.

In 1994 he received his International Referees Certificate for Muay Thai and refereed all over the world, WKC, WKA, under BJC (Bob Jones Corporation). His clubs branched out going into TMA (Total Martial Arts) through Promotion and Grading. He and his students progressed.

He has travelled extensively and trained throughout Thailand, Cebue, Fiji, Japan and China. In doing so he met many high grades and picked their brains for knowledge. He has ran many tournaments e.g.; karate, kickboxing, FAKO and full contact etc, with the help of Renshi Zlatko Peter Kitak, Billy Bowman, Malcolm Anderson, Garry Huggard, Bob Batwin and the BJC.

In 1995 he travelled to Japan for the World Titles with Stan Longenities, Steve ‘Super Kick’ Vick, Butch ‘Man Dingo’ O’Hallo and the rest of the squad and personally trained with Grandmaster Mr. Ishi 10 Dan of Saidokan Karate.

Over the years he has achieved many successes and gained a tremendous amount of knowledge which has to this day been a big contribution to his life.

Today, he is still learning and teaching through Kyoshi Zlatko Peter Kitak and Kaicho Malcolm Lomax. The style he is now learning is the Tibetan Martial Arts Lama Kung Fu and San – Chi – Kai Freestyle Karate. They are both based on Animal Forms that enhances his past arts and adds a new adventure to his career.