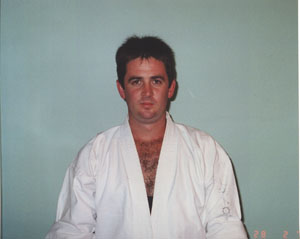 Inducted into the A.M.A.H.O.F.(Inc) for 2004
INSTRUCTOR OF THE YEAR VICTORIA – ESKRIMADOR

Inducted into the W.K.U.H.O.F. for 2004
INSTRUCTOR OF THE VICTORIA – ESKRIMADOR

Maestro Daniel Brown started training in 1983 with Greg Henderson and in 1987 when Greg returned from the Philippines with Abner Pasa and Celia Managus continued training under Greg, now teaching the Warriors system of eskrima in Christchurch.

In 1990 after political in-fighting Greg Henderson broke away and continued teaching Daniel in the HAMA style of eskrima. In 1992 Daniel left Christchurch to come to Dunedin to further his career in baking and to start a family. Soon after Daniel founded Cebuano Martial Arts operating out of the Otago University, which in 1995 changed its name and became Diamondback Eskrima International NZ. Daniels involvement at the University of Otago and his most recent additions are his program for Womens Self Defence and Awareness and his Holistic Wellbeing courses.

Whilst talking to his instructor one day a question was asked as to whether Daniel wanted one million dollars or spiritual enlightenment, his answer led him on a journey of discovery and in 1996 Danny received his Reiki 1st, 2nd and 3rd Degree and in 1999 his Reiki Master/Teacher status.

Maestro Brown believes that being leaders, teachers or those that can guide in a useful way tends to benefit people who have a need to learn. What he has is a simple program about discovering oneself , learning ones limits, and then expanding ones safety net. Results do vary, yet the main benefits are a person with new or enhanced skills i.e. better concentration, problem solving and an unconditional way of understanding. It is about seeing options, or about choice, left or right, up or down. If a person can reason with these questions then they can learn about consequence.

The future is continually happening now and it is our responsibility to provide skills for our next generation so they may better understand themselves and then the wheel of life turns and grows.

Certificate in Spiritual Development and Awareness