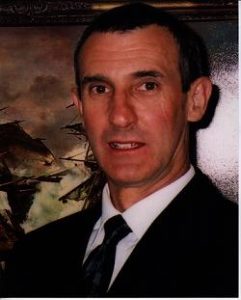 Inducted into the A.M.A.H.O.F.(Inc) for 2003
LIFETIME ACHIEVEMENT AWARD SAVATE

Inducted into the W.K.U.H.O.F. for 2003
LIFETIME ACHIEVEMENT AWARD SAVATE

Terrence Bridgeman was born and educated in Perth, Western Australia. He is a widower with an adult daughter Janel and a son Nigel who is also an expert in Savate. He enjoys discussing the martial arts and is an avid cyclist.

He commenced teaching in 1969 and is world renown for his knowledge and skills in Savate and its associated disciplines. He has taught a large cross section of society from the disabled to counter terrorist professionals. The ‘Federation Francaise de Savate Boxe Francaise’ recognises that he is one of an elite specialised few who is able to instruct Savate as a holistic discipline.

Introduced into Chausson/Savate as a personal combat discipline he has investigated and assessed the methods of some of the great 20th century masters whose lineage dates back to the 19th century. From these varied experiences he has evaluated and integrated a multifaceted modular syllabus comprising elements of classical and contemporary Chausson, Savate and associated weaponry.

Apart from operating his own school and formulating anti rape courses for women he had conducted classes for the YMCA for 13 years and the University of WA for 12 years. He has organised and/or has been involved in a large number of demonstrations and seminars in Australia and overseas.
Over the years he has been in many newspaper articles, telethon and several television current affairs shows. He has written numerous articles that have been published in Martial Art magazines in Australia, New Zealand and with notations in a number of articles around the world.

In 2002 the ‘Federation Francaise de Savate Boxe Francaise’ invited him and his top instructors Colin Pestell, Roland Armarego and Nigel Bridgeman to a fully funded visit to Paris. They were given access to all the top training facilities. They attended special seminars by the ‘Comite National Canne de Combat et Baton’, ‘INSEP’- the French Institute of Sport, Savate Defence, RAID a semi-secret training facility for an elite Police anti-terrorist unit and met several legendary Savate masters,

This broad exposure helped reinforce the value of the Bridgeman syllabus for its historical content and present day applications. ‘Bridgeman Savate’ has now established itself as an exclusive group in this specialised multifaceted field.

Colin has been able to combine his love of Savate with travel and has trained throughout Australia, North America, England, France, Holland, Portugal, Spain and North Africa. After a highly successful visit to Australia by high-ranking members of the ‘Federation Francaise Savate de Boxe Francaise’ his international training was highlighted by a fully funded invitation to visit Paris. In February 2002 Colin was a part of a four-man delegation consisting of Roland Annarego, Nigel Bridgeman and Terence Bridgeman promoting the personal combat and weaponry disciplines of Savate. The ‘Federation Francaise Savate de Boxe Francaise’ gave the Australians generous access and exposure to Savate. The delegation freely exchanged ideas and visions for the future with their French counterparts and Colin returned to Australia with an increased respect for the history and content of his art.
Colin lives and works in Perth with his long-term partner Lindsey-Marie. They both enjoy an active lifestyle, with frequent visits to England and Europe. Savate has become a constant in his life and he looks forward to continuing his passion into graceful old age!

‘Bridgeman’s guide to Savate Resistance gives a systematic update on how that fighting ‘craft’, which sprang from the tumult of Europe’s revolutionary history, is currently practiced in Western Australia after decades of honing by the author.

For a slim volume of a little over hundred pages there is a great deal of useful information about Savate’s unique striking and grappling methods, conveyed in a concise yet unambiguous style. Most of the Bridgeman Savate syllabus is set out in six categories defined by range, from weapons use and kicks delivered from a short distance though to close-quarter attacks with one or more combatants on the ground. Specific attacks, counters, and drills are interspersed with physiological explanations and combat principles applying to these ranges.

We are reminded, for instance, that most hostilities begin in the ‘envelopment’ range where opponents can reach each other with both hands. Before launching into a take down or strangle hold on one’s opponent there is a chance of averting violence, by adopting appropriately defended yet de-escalatory body posture during the initial scuffling phase of moderate physical provocation where it typically escalates. Yet from grizzly knee cranks to elegant burling weaves (a technique traditional stick fencing), to wielding a chair, the book lends itself very well to readers wishing to try out the many fighting techniques as they read through them, whether by themselves or with others. In addition to a very interesting concluding section, ‘Plan, Adapt, Improvise’, on the general principles that make Savate a psychological as well as physical means of defence, the book also contains many illustrations and photographs of historical interest.’
Book $40 plus postage can be purchased through