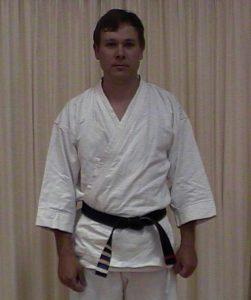 Inducted into the A.M.A.H.O.F.(Inc) for 2003
INSTRUCTOR OF THE YEAR  BUDOKAN BUJUTSU

Inducted into the W.K.U.H.O.F. for 2003
INSTRUCTOR OF THE YEAR  BUDOKAN BUJUTSU

His father, Ramon Lawrence, was then serving in the Royal Australian Navy. The family was posted to England in 1965 for five years before returning to Australia in 1970. After two years back in Australia, the family was again posted to England for another three years. It was during this second posting that Russell had his first taste of Judo in 1973, obtaining the grade of 2nd Mon White Belt at a dojo in Waterlooville, England.

His martial arts really started in detail in January 1980 when he joined the HMAS Penguin dojo of Jishukan Ryu Jujitsu. He trained at the school for one year until the family was posted back to Perth, Western Australia. In 1982, he helped his father establish the Jishukan dojo ‘Riki Gun Shiba’ at HMAS Leeuwin in Fremantle. In 1984 he was awarded his Shodan in Jishukan.

In 1986, he commenced training in Kendo with the West Australian Kendo Renmei and became the inaugural Treasurer for the newly formed association – a position he still holds in 2003. He was awarded his Shodan in Kendo in 1989 at the Australian Kendo Championships held in Canberra.

In 1987, he helped his father to set up the Budokan Academy Dojo at Canning Vale, Perth, Western Australia, where both Jishukan and Kendo were taught.

In January 2003 he was placed third, again partnering with Ramon, in the Australian Jodo Pairs Championships held on the Gold Coast of Queensland. He represented Australia in an International Goodwill Team Competition against New Zealand which Australia won 3-0. He was also selected into the 2003 Australian Jodo and Iaido Teams.