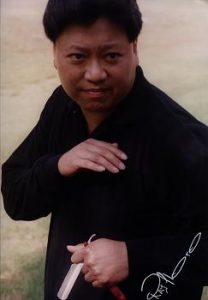 Inducted into the A.M.A.H.O.F.(Inc) for 2003
INSTRUCTOR OF THE YEAR – KALIS ILUSTRISIMO

Inducted into the W.K.U.H.O.F. for 2003
INSTRUCTOR OF THE YEAR –  KALIS ILUSTRISIMO

Eskrimador Raymond Floro was born in the Philippines on 6th October, 1963. He is now a naturalised Australian Citizen. He speaks English and Tagalog (Filipino) and has a Degree in Bachelor of Business (Marketing) and the Associate Diploma in Ministry (Honours) where in 1995 and 1996 he was Dux both years and Head Student 1996).

He began his martial arts journey at the age of nine. With a keen interest in anything that would enhance his skill in the arts of his homeland, he became a NSW State champion foil fencer by the mid-1970’s. He studied Balintawak arnis until the early 80’s. Soon after he was introduced to Tony Diego, Edgar Sulite, Rey Galang and Christopher Ricketts. With the help of Tony, Edgar and Romeo Macapagal, he was introduced to Grandmaster Tatang and the Kalis Ilustrisimo system. The name ‘Tatang’ is a Filipino term of respect and endearment meaning father or mister.

By 1989 he had received countless hours of one-on-one instruction with Grandmaster Tatang and, at that time, his senior instructors. He was awarded full teaching accreditation by Grandmaster tatang and Master Diego and was tasked to disseminate the Ilustrisimo system.

Eskrimador Floro is the most senior Kalis Ilustrisimo representative in Australia today and stays closely connected to his friends and mentors still in the Philippines. Together they maintain the integrity of Kalis Ilustrisimo worldwide.

He is also a 3rd Degree Black Belt in the late Edgar Suliite’s ‘Lameco Eskrima’ and a Black Belt in Sagasa (Filipino kick-boxing) but his true love is Ilustrisimo. Ilustrisimo is a martial art complete in itself and easy to learn and as such Kalis Ilustrisimo is also a perfectly complimentary system. With his teaching preference to be one-on-one or small groups, it is possible to gain an understanding of the system in about three months or so. Of course mastery then comes according to individual efforts.

He was involved in the Guardian Angels – Australia where he led and coordinated foot patrols through out Sydney. He was responsible for the training of patrol members. He establish training schedules and techniques suitable for restraint and arrest for patrol purposes and was involved with community projects such as crime awareness and prevention in schools. His mission was to provide realistic “street” effective defence and restraint techniques that was easy to learn, so that Guardian Angels members would be “Patrol Qualified” in the minimum amount of time. One of his achievements was the establishment of a teaching curriculum that was adopted as the standard requirement for Guardian Angels patrol members.

As a result of the simple brilliance of Kalis Ilustrisimo and the generous ‘no secrets’ approach by Eskrimador Floro, many of his students are instructors running successful schools who have added Ilustrisimo to complement their own arts. Several of these instructors enjoying the extra training are AMAHOF also. His mission is to spread the art of Kalis Ilustrisimo in Australia by making it an ‘open’ martial art so that all martial artists irrespective of their Martial Art style can learn this weapons based art. This is achieved via seminars for martial arts clubs across the board, and private one-on-one teaching aimed at Martial Arts Instructors. Instructors can add Kalis Ilustrisimo weapons seminars to their curriculum as complement to their existing teachings, rather than see it as a competitor.