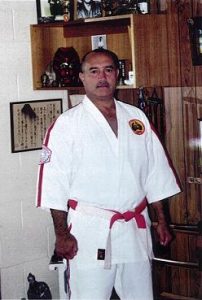 Inducted into the A.M.A.H.O.F.(Inc) for 2003
INSTRUCTOR OF THE YEAR QUEENSLAND – KARATE

Inducted into the W.K.U.H.O.F. for 2003
INSTRUCTOR OF THE YEAR QUEENSLAND – KARATE

Hanshi Pat McKean is regarded as one of Australia’s leading martial artists and truly a master instructor. Hanshi McKean is the founder and chief instructor of U.K.B. Kenkokan Martial Arts. He is a Hanshi Hachidan (8th Dan) and one of the pioneers of karate in Australia.

Bom in 1950 in India, Hanshi Pat McKean has been training karate continuously from the age of 4. He has been teaching karate in Australia since 1970. Hanshi McKean is a Vietnam Veteran and served with the 3rd Battalion, Royal Australian Infantry in Vietnam in 1970 – 1971. He was the Outstanding Soldier of the Year in 1970.

Hanshi McKean has competed in state, national and international competition. He is a fully accredited NSW Department of Sport & Recreation Level 2 Coach, St John’s Ambulance First Aid certified, an International A Grade Referee and is the current National President of the Australian Koshiki Karate-do Federation.

Personal strict discipline, good attitude and manners, a healthy diet and good hygiene are stressed at all times. Hanshi McKean makes no exceptions regarding these principles and this ensures that all students receive maximum benefit from regular and sensible training.

Unlike numerous Australian, New Zealand, Japanese, Korean, European and American high-grade instructors who very seldom, if ever, train with their students and do not participate in the physical training of their students. Hanshi McKean trains daily with his students and gets to know all his students personally. He does not believe in any secret techniques as the style he teaches is based on traditional as well as modern, scientific and safe principles.