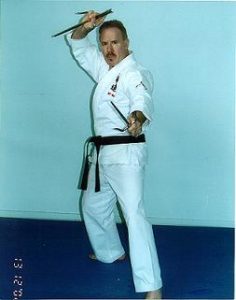 Inducted into the A.M.A.H.O.F.(Inc) for 2003
INSTRUCTOR OF THE YEAR VICTORIA – KARATE

Inducted into the W.K.U.H.O.F. for 2003
INSTRUCTOR OF THE VICTORIA – KARATE

Even from early primary school years Shihan Mervyn was involved in mock fights with fellow school friends. During lunch and recess breaks he and others would stage play fights imitating real life scenarios. From these early exploits Shihan had a taste for the fighting arts and sought out different disciplines to study. Boxing and wrestling were the first unarmed self-defence methods to capture his interest but after several months of practise, enthusiasm started to wane.

It was a chance meeting with a Dutch exponent of Ju-Jitsu, Mr. Bill Pauuw, that sparked a renewed interest in the fighting arts. Although originally wishing to study karate Shihan was informed that only Jui-Jitsu tuition was available at present. Shortly after Shihan enrolled as a student of Kito Ryu Jui-Jitsu and continued his studies for several months.
At the end of 1967 a Japanese Kyokushin instructor, Mr. Kato, came to Australia and conducted a seminar over several days at a local seaside beach. As Shihan at this time was employed as an Insurance Clerk he asked permission for time off (3 days) to attend this special training seminar. His employer refused permission and Shihan, together with another co-worker, simply did not turn up for work but attended the seminar instead. Shihan was immediately impressed with the training and made up his mind to pursue Kyokushin karate from that day on. On Shihan’s return to work he and his friend were reprimanded for their non-attendance but fortunately were allowed to retain their employment. From that day on Shihan trained diligently (6/7 days a week) and within 3Â½ years received his Shodan (Black Belt). Prior to receiving his Black Belt Shihan instructed at Mr. Pauuw’s International School of Self Defence and on attaining Black Belt returned to his Jui-Jitsu studies which he continued with for several years.

In 1974 Shihan travelled to New Zealand to attend a 10 day clinic in Kyokushin Karate conducted by Kaicho Nakumura and Shihan Shigeru Oyama.
This was Shihan’s first meeting with Kaicho Nakumura and was the start of further communication leading up to Shihan’s acceptance into the World Seido Juku Karate Organisation.

In 1975 Shihan married and travelled to Japan to study under the legendary Grand Master of Kyokushin- The late Sosei Mas. Oyama. Shihan stayed for 3 months and trained twice a day 5/6 days a week. The training was hard and being a foreigner communication was difficult. Prior to leaving Shihan was promoted to Nidan. Several incidents that happened during Shihan’s training at the Tokyo Headquarters made him reassess the direction in which he was heading. Disillusionment led to disenchantment and Shihan returned to Australia with a totally different perspective. On his return to Geelong Shihan decided to travel to Adelaide and open a dojo free of the restrictions of his home state Victoria. Shihan conducted classes 3 times a week from an old church hall with approximately. 20 students. This dojo was named the H.D.R. School of Karate. The initials standing for Humility, Discipline and Respect.

After spending 6 months in Adelaide Shihan decided to return to his hometown to open a sports store. Through communication with Kaicho Nakumura, Shihan became aware of the newly formed Seido Organisation and immediately applied to join. After Shihan submitted his ideas and philosophy on the Martial Arts, Kaicho Nakumura, after a long deliberation, agreed to accept him into the Organisation. Shihan then travelled to New York in June 1977 and studied under Kaicho Nakumura for 5 weeks.
Prior to leaving New York Shihan was promoted to Sandan.

The first class started on September 20th. 1977 with a class of 20 students. The dojo was situated above the sports store in James Street, Geelong. It was an old attic, which required substantial renovation to make it suitable for training. It was quite spacious and when finished looked very attractive.

After 3 years in the upstairs dojo, circumstances dictated a shift in location. The dojo was now located on the waterfront and operated 3 times a week. Numbers started to increase gradually as the news of Shihan’s commitment started to spread. At this time Shihan returned to security work at local nightclubs as well as driving taxis during the day. It was a hectic time running from one job to another in order to meet his obligations.

In January 1983 another dojo was opened in Clifton Springs (approximately. 15 kilometres from Geelong) and this operated two nights a week. Shihan was now offering classes five nights a week at two locations. During a visit to Honbu Shihan was graded to 4th Dan despite having sustained a broken arm during training.

Towards the end of 1983 three students were to try for Black Belt and as we had insufficient sparring students Shihan invited Shihan Renzie Hanham and Shihan Andy Barber along with 40 other New Zealanders to attend and officiate at the grading. This was an incredible week with parties, training and sightseeing – the Kiwis certainly made their presence felt. It was a week that is still talked about up to this day. During this hectic week three students tried for Shodan with two successful – Shihans first Shodans – Senpais Terry Bourke and Trevor Dean.

Shihan was now offering self defence instruction at several schools in and around Geelong as well as taking classes five nights a week and working security several nights a week. The student numbers slowly increased and eventually another training night was incorporated into the Clifton Springs dojo schedule.
Eventually separate children’s classes were offered at both dojos and this proved to be very successful. As student numbers increased Shihan was able to utilise higher Kyu grades to assist with the now becoming busy class instruction.

In 1987 Shihan discovered a large disused timber shed that was advertised for rent. After inspection by several students it was decided that this would be our new home for Shihan and his students. Long hours of tedious work followed in order to prepare the building for use as a dojo – pulling down of walls, sanding boards for the dojo floor, erecting change rooms, toilets and showers, painting, tearing up and relaying of floors – until after 6 months it was ready for use.

In January 1988 the first class for students was held at Shihan’s current premises. The response was incredible with many students lining up to train even though the floor was not finished (we trained on carpet in the limbering up area). Eventually, through trial and error, a floor was constructed which was spacious and smooth. With a more varied class schedule offering tuition 7 days a week, numbers started to increase dramatically. Everything was going smoothly until in 1990 a major building society in Geelong collapsed causing many hundreds of people to lose thousands of dollars as well as catastrophic job loss. Repercussions were felt throughout Geelong and this in turn started to affect the dojo membership. It was only just a few years ago that the economic situation started to pick up and the City of Geelong resurfaced from its negative attitude.

In October 1990 Shihan was invited to attend, as Australia’s representative, a demonstration group to travel to Japan as part of a worldwide team to celebrate the New York/Tokyo sister city celebration. This was a momentous occasion as this was the first public demonstration of Seido Karate in Japan. It was a whirlwind 10-day event for the 12-member team with several demonstrations together with special dinners, press interviews and television appearances. It was an important highlight in Shihan’s life and a tremendous honour.

October 1996 saw Shihan, together with approximately. 20 students, attended the 20th anniversary of the World Seido Karate Organisation in New York. This event was attended by many hundreds of Seido students from around the world. To mark this occasion a tournament was staged and participants from every Seido branch entered. Australia entered 15 students and all performed well with some gaining major placing’s. This event was also a special time, apart from the honour of being promoted to 6th Dan and being a part of the celebrations, Shihan was able to bring his two daughters, Kristy and Alisha to New York and spend valuable time with them sightseeing and relaxing.

At the start of 1997 Shihan established a special Junior Program to cater for the much-neglected 5 to 8 year olds. This program proved to be a phenomenal success with all courses fully booked. New courses have had to be introduced to meet the demand. The specially adapted syllabus allows the young child to progress at a steady pace and at the same time receive tangible rewards for his/her effort.

On 1st November 1999 Shihan Mervyn announced that he had severed ties with the Seido Karate Organisation in order to form his own style – Zenshin Karate. He felt the style that he had been involved with for over 20 years did not address the very reason most people join a martial arts school – self defence. He also felt the syllabus, both senior and junior, that was required to be learnt by the students was unbalanced, making learning difficult for new students.

Shihan Mervyn firmly believes in the traditional values as evident in oriental arts, but in today’s society practical self-defence should also be an integral part of one’s learning in the martial arts.

With the formation of Zenshin Karate the traditional values of Humility, Discipline and Respect were intertwined with practical self-defence within a more balanced and realistic syllabus. Through his studies of Boxing, Wrestling, Ju Jitsu and Security work over the last 30 years he has formulated techniques that are simple, practical and easy to apply.

The formation of Zenshin karate also gave Shihan the chance to expand his knowledge and undertake a special instructors Course in the Self Defence system called Krav Maga. It was an extremely enjoyable course (21 days- 8/9 hours a day) where he was able to train with the top instructors in a friendly and supportive environment.

Krav Maga is a unique system that has received international recognition as an innovative, effective and highly practical self-defence and fighting method. This recognition has come largely from experts in Martial Arts and hand-to-hand combat instructors from tactical units around the world, operating in civilian, law enforcement, and military contexts.

According to many professionals who have experienced Krav Maga training, the most important and prominent characteristics of the system are the following:

The system is comprised of simple, easy-to-learn techniques based on natural body movements and logical defence principles,
Consequently, practitioners can attain a high level of proficiency in a relatively short period of instruction,
The techniques and tactics work even in harsh, uncontrolled and violent environments,
Individuals retain the ability to perform the techniques at a high level with minimal review and practice.

With schools in Perth, Melbourne, Ballarat, Geelong and Clifton Springs, Shihan continues to look for, and find, new and exciting ways to Teach practicable self-defence as well as traditional martial arts to a broad spectrum of the community. Special classes for juniors and a warm welcoming atmosphere encourage self-development.