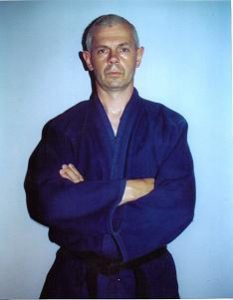 Inducted into the A.M.A.H.O.F.(Inc) for 2003
INSTRUCTOR OF THE YEAR –  KALIS ILUSTRISIMO

Inducted into the W.K.U.H.O.F. for 2003
INSTRUCTOR OF THE YEAR – KALIS ILUSTRISIMO

Sensei Darrell Barrett’s first history of martial arts started in 1963 when he was 5 years old and his father, who was a successful boxer in the British navy, wanted his son to follow in his footsteps. He signed him up for boxing lessons, which he attended for two years, winning the majority of his bouts. At the age of nine he had my first introduction to Judo at the local youth club where he was continually thrown around the dojo by much larger and older judoka than himself. (So much for the gentle way!) He gave that up after only six months. When he was fifteen he took up Kung Fu, which seemed to suit him very well. The style was a “hybrid” developed from a hard style and combined with a soft style, he was therefore taught two different ways of dealing with a situation, one way would be designed to immobilise your opponent in a way where they would no longer be a threat and the other way would be a fairly passive response which could even lead to you turning around and walking in the other direction. He then had the choice should he be confronted to take whatever action he deemed necessary. He studied this style called ” heaven and thunder fist’ until he was twenty one and came to live in Australia.

The training was very intense and he would train for four hours twice a week, and once a month he would have an all day session. He competed in several competitions and took a decent number of gold medals, and in his seven years of study he achieved the grade of red sash which enabled him to instruct younger and lower grades, red was followed by blue then black, but his immigration stopped him from going any further.

Unfortunately he did not bring his grading certificates with him and they have since been lost by his family in the UK and the club he was a member of no longer exists,’ although he has spoken to a club in Norfolk that still practices Heaven and Thunderfist.

Upon arriving in Australia Sensei Barrett visited most of the Kung Fu clubs but did not seem to find what he was looking for in style similarity, He then tried a few different arts for the next couple of years including karate and Taekwando but lacked enthusiasm, so played soccer instead.

In 1989 he took his son along to the Jishin Judo Club at the local Police and Citizens Youth Club where he met Sensei Kelly Morgan. He had several conversations with Sensei Morgan about his previous martial arts experience and Sensei Morgan persuaded him to join his club and learn Judo. So from March 1989 he was a practicing judoka. He earned his first grade of yellow belt within 3 months, and with lots of training and determination graded fairly regularly. At the time he was 32 years old and was training with the State under 16 squad who were going to the Nationals as he was about the same weight as them, so he had to learn quickly as these young guys had youth on their side and liked to get the better of their elders, but it didn’t always go the way they liked. He also competed at state level winning at the very least a bronze medal in every competition he entered, unfortunately a freak skydiving accident forced him to retire from serious competition, which left him to concentrate on coaching. By the time he was an orange belt his sensei had enough confidence in his ability to start training the younger children in the basics of judo which gave him the chance to be a junior instructor at a week long judo camp for kids.

Within just over 4 years in the sport he was given 3 months to prepare for his Shodan, something he did not feel worthy of but followed his Sensei’s instructions. He spent four evenings a week and several Saturdays preparing for his grading and spent four hours in front of Sensei’s Andrew Fleming and Kelly Morgan going through everything he knew including a public demonstration of the Kata. On 6th November, 1994, he became a Shodan and assistant coach and teacher to Sensei Kelly Morgan. He spent a lot of time on the mat teaching both juniors and seniors and nothing pleased him more to coach a student to competition standard and watch them take gold at the next competition. He then ran special training programme’s on the weekend to teach judo, fitness and self defence which proved quite popular. He also would assist Sensei Morgan in running a women’s self defence class one evening a week. In Nov 1996 he was awarded his Nidan (2nd Dan) for services and dedication to martial arts and the Jishin Judo Club.

In 1997 the club was honoured to be joined by Hanshi Peter Chek who brought with him a host of new knowledge based on the Kawaishi method of judo and jujitsu, this is where his old kung-fu knowledge came in very handy as it made the transition into Kawaishi method so much easier and he seemed to learn from Hanshi Chek very quickly. Hanshi Chek soon authorised him to teach this style at the club under his watchful eye and in Oct 98 he personally graded him to Sandan (3rd Dan) in the Kawaishi method and Kano method. At this point he was the main teacher at Jishin, and spent his entire time on the mat teaching Kawaishi and Kano method. He also assisted in the training of five black belts.

In 1999 Jishin organised the first ever international judo competition in Western Australia in honour of Hanshi Chek which attracted around 150 competitors from Australia and overseas. Sensei Barrett was the manager of the competition and put a lot of work and time into organising and running this very successful competition. In Aug 2000 the club was very fortunate to be visited by Grandmaster Barry Bradshaw and his club, who spent a lot of the training session with him asking questions and getting him to demonstrate different techniques for him, which at the time he found a bit strange even though he felt very privileged. He found out why at the end of the session when Grandmaster Bradshawe and Hanshi Chek presented him with his Yondan (4th Dan), this was a great honour to have his Yondan signed by a 10th Dan and a 9th Dan. In 2001, the club organised a second International Judo Competition, once again in honour of Hanshi Chek. This time Sensei Barrett was competition director, and once again, it was a very successful competition. Shortly after this competition, Jishin Judo club decided to stop operating. After much discussion with Sensei Kelly Morgan, he agreed to purchase mats from him to start his own club.

Phoenix Martial Arts was formed in June 2001. Hanshi Chek decided he would join in the running of Phoenix, and he became the technical director. Sensei Barrett started with only 2 children and 4 adults, but soon grew to 8 children and 7 adults. He teaches the children Kawaishi and Kano, and also self defence. He has developed different ways of teaching the children because some of them are as young as five, and when you have a child with the attention span of a goldfish, you have to be adaptable in your teaching methods. This has proved to be quite a challenge, but he believe by the results, the methods he uses are very successful.

The Club has also changed their grading system so that they now have Junior and Senior only, and not three levels of Juniors as in the Judo grading system. They grade the children approximately every 6 months. During the time leading up to the grading they have to prove that they involve their martial arts etiquette at home as well. This is achieved by getting the parents to give them a score out of IO for each week leading up to the grading; this has proved very popular with the parents. He still chooses to teach the students to use a passive response to aggression wherever possible, so that if somebody just grabs them, they don’t have to rip their arm out of it’s socket and beat them over the head with it. The seniors grade when Hanshi and Sensei Barrett believe they are ready to progress to the next level. They have graded their first Shodan in the club recently.