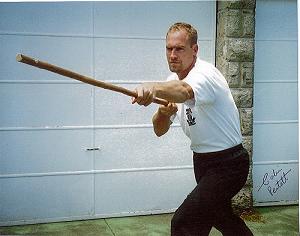 Colin Pestell was born in Perth Western Australia. After completing his schooling he went on to graduate from the University of WA with a Bachelor Degree in Human Movement and Anatomy and a Diploma in Education. Since then Colin has worked for the Education Department as a Physical Education and Language specialist. He spent several years working in conjunction with Children’s Hospitals with children who suffered from severe emotional, psychological and social problems. Colin now works with disabled students across several sites and has a particular focus on boys who are experiencing difficulties in school.

Colin commenced his Savate training under the eminent Terence Bridgeman in 1986. Quickly impressed by the arts holistic nature and combat effectiveness he has began a life long commitment to Savate. His martial arts career has progressed from student to instructor, filled with both hard work and enjoyment and provided him with great satisfaction and opportunities to meet many exceptional people.

In 1987 Colin was the founding president of the University of Western Australia’s Savate club, which has provided many great students. His training under tutelage of Mr Bridgeman has continued and has acquired friends in many different combat styles. Colin’s role as an assistant instructor expanded when in 1997 he took over the majority of the teaching responsibilities of the Bridgeman Savate club in Perth Western Australia. He still enjoys a busy training schedule, running classes at UWA and at Wesley College.

In 2000 the Perth based Savateurs formed the Bridgeman Savate Association, with the aim of promoting and developing the Bridgeman syllabus in Australia and internationally. Colin gladly accepted a role on the management committee as Secretary and has assisted the group establish itself as an exclusive and elite group in this specialised multi-faceted field.

Colin has been able to combine his love of Savate with travel and has trained throughout Australia, North America, England, France, Holland, Portugal, Spain and North Africa. After a highly successful visit to Australia by high-ranking members of the ‘Federation Francaise Savate de Boxe Francaise’ his international training was highlighted by a fully funded invitation to visit Paris. In February 2002 Colin was a part of a four-man delegation consisting of Roland Annarego, Nigel Bridgeman and Terence Bridgeman promoting the personal combat and weaponry disciplines of Savate. The ‘Federation Francaise Savate de Boxe Francaise’ gave the Australians generous access and exposure to Savate. The delegation freely exchanged ideas and visions for the future with their French counterparts and Colin returned to Australia with an increased respect for the history and content of his art.

Colin lives and works in Perth with his long-term partner Lindsey-Marie. They both enjoy an active lifestyle, with frequent visits to England and Europe. Savate has become a constant in his life and he looks forward to continuing his passion into graceful old age!