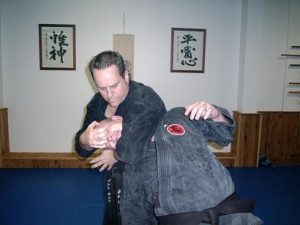 At the age of 37, Sensei Brett Gross is a Senior Ninjutsu Instructor and student of Sensei Wayne Roy. He has been a member of Mr. Roy’s Organisation for 15 years, teaching for the past 12 years.

Sensei Gross began his Warrior Quest, at the age of 14, studying Judo with a local Instructor in the St. George Area of Sydney, NSW. At the age of 16 he began Karate, which he continued until 1988. He has also studied Kick boxing during this period.

In 1988, he attended a workshop held by Sensei Roy, which covered a number of Ninjutsu strategies and tactics. The workshop captivated him, beginning his journey in Ninjutsu and personal development for life.

Married and a father of 3, he has been able to extend his life skills to his Martial Arts for all to benefit. A strong part of his warrior quest is his personal development, which is guided by his Instructor.

This “personal development” has attracted such success as teaching local community group’s self-defence, and inspiring younger adults to excel to excellence through the Martial Arts. Sensei Gross expresses his concerns within martial arts training as – “Many Martial Artists get lazy, thinking they know it all…. I see and hear it all the time and they become very ordinary exponents of their art and life …. they don’t move out of their comfort zone!…”

Sensei Gross operates his Dojo within The Kokoro Ryu Centre – Campbelltown, run by Shihan Wayne Hanley (AMAHOF Kobudo Martial Artist of the Year 2001) and his wife Sensei Melissa Hanley. Brett attends Gekken and Kenjutsu (cutting) classes with Shihan Hanley, challenging himself at all times on his quest.