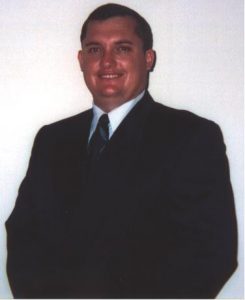 Sensei Koopmans first started training in Martial Arts in the style of Goju Kai – Traditional Style of Karate in the suburb of Lawnton – Brisbane, approximately March 1986. His personal history up to that point (16yrs old) had been fairly difficult and at times a victim of continual violence from street kids. In his life he never believed in defending himself even in self defence, yet the fear of violence controlled his life too much.

The Dojo he chose was very far from where he lived, on purpose, so that those who would seek to harm him could not know that he was trying to improve himself and take advantage of this fact. He trained twice a day for 1.5 hours per lesson, 4 days a week for quite sometime, and then due to costs of travelling forced him to delay continuing, however, he realised that through this new found knowledge he could believe in himself again and take back control of his life.

In the later half of 1986 he left home, and lived in Fortitude Valley. In the Valley Police Youth Club, he found that Goju Kai had a Dojo, so he rejoined under the same style and trained in their rapid Black Belt training course. In early 1997 he joined the Australian Defence Force Reserve in the 2/14th Armoured Regiment, and this forced him to stop training in Karate for awhile.

In November 1988 (18yrs old), he attended a class for Zen Do Kai – Irezumi Family, in Lindum Brisbane, run by Sensei Neil Foster and Dai Sensei Peter Davidson. The following day he joined ZDK and trained with them for the following 13 years.

In 1990-1991 he travelled to Japan, as a representative with Apex (charity group) and whilst there he was invited to trained with Shotokan Karate in Tsukui – north from Tokyo, and was given recognition for his Black Belt status from the Godan who ran the school, unfortunately he was not able to train further due to a serious accident one week after returning home to Australia that nearly ended his life. He broke both legs and shattered his right heel into many pieces in an industrial accident, and the next twelve months to two years are a blur for him. He remembers continuing training with ZDK (even from a wheelchair) but more than that is difficult for him, being forced to concentrate on learning to walk again did not allow him to continue his links with his Japanese friends and he has very few photo’s in evidence.

From approximately 1991-1992, he started to train at the Australian Academy of Martial Arts under Sifu Allan Stewart, his training incorporated the Kung Fu styles of Wing Chun, Farn Harn Do and Jeet Khun Do as well as bringing in specialty trainers for Knife, Stick and Trapping/Grappling training.

The training was personal one-on-one for the Kung Fu side, and group training for the specialty Instructors, and he trained there two to three times a week for 1-2 hour lessons for two years, with his head Instructors.

To learn different approaches and different techniques was something that remains with him to this day, the importance of blending knowledge and to improve skills through other people’s experiences is the way of becoming the best you can be.

In 1991 he travelled to New Zealand and met and trained with (then) Sempai Brian Twomey and later Shihan Rob Tierney in the Zen Do Kai system in Tauranga. Since then he has travelled many times to New Zealand to train with Renshi Brian, and hopes that in some way he has been able to assist in the learning of his students as much as he has grown as an Instructor and Student within the Martial Arts learning.

At the same time of his ZDK and Kung Fu training, Bob Jones Corporation decided to introduce Mauy Thai throughout it’s structure (1992), and encouraged students to learn a more basic yet effective form of defence, given his desire to learn and mix, he started training heavily with them, their classes followed on straight after Karate lessons, so this was also convenient albeit very painful to start with !!

Renshi Brian Twomey and Sensei Koopmans training became very mixed, they trained together as much as possible, and discussed different views on the best fighting techniques that could enhance their teachings. They blended all of their backgrounds – Kung Fu, Karate (Traditional and Freestyle), Mauy Thai, Kick Boxing (he competed for 7 years), Women’s Self Defence, Streetwise fighting and Weapons into one complete new Style called Chu Zhen Dao, which was created by Renshi Brian Twomey. He is very proud to be part of this exciting mix of different experiences, and to continually learn new things from the students. They encourage experienced fighters as well as families to share in this knowledge without the fear of injuries or scorn. He bases decisions on what is fair to all parties and to have a good committee of their own that are forward thinking people who are also students of the style, therefore the direction of the style will always remain in the hands of the practitioners.

Renshi Brian has graded Sensei Koopmans to the rank of 3rd Dan Black Belt – Full Sensei in the style of Chu Zhen Dao on 20th of March 2001. This is his highest official rank

It is his hope that with his induction into AMAHOF, he would be able to show people through his own experiences, that no matter who you are now, you will always be able to improve yourself, your life and help others do the same. To do this without thought of pure financial gain or physical dominance over other people, and to give ones-self’s time and effort purely to teach and learn, this is the real purpose of Martial Arts, not just a Fighting Style, but a Way of Life!

Sensei Koopmans has trained under the following Instructors: